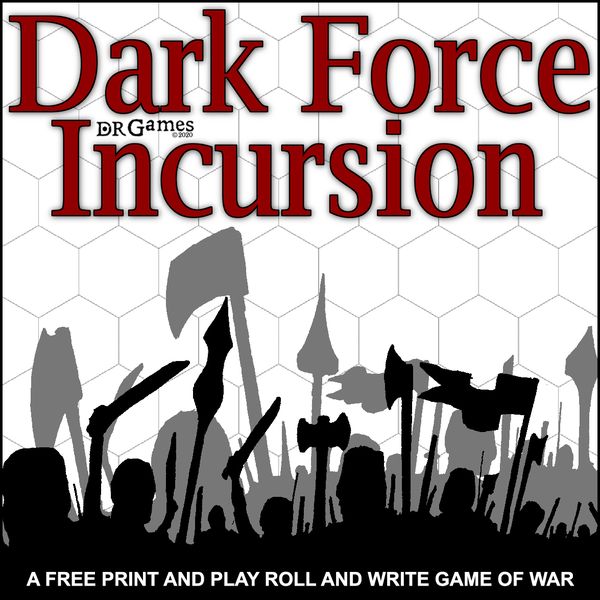 I first encountered game designer Toby Lancaster under his other moniker of Dark Realms Maps, working with Geeks Collaborative Gaming doing the maps for some of their projects. Early on in the pandemic, Toby came up with the idea for a free, single-player, roll-and-write game to help people get through what everyone expected to be a short situation.

Not only did was the situation not short, but the project also found itself expanding as well. The rules and initial five Mountain maps were always intended to be free, and remain free and accessible in numerous locations. But Toby gotta eat, so the project continued via Kickstarter with four new expansions that brought in new rules for “Forest, Lake, Marsh, and Muster & Ambush hexes, each with five new maps. The campaign was (again, intentionally) low priced, and wildly successful. The concept proved that it “had legs” but since Kickstarter isn’t ideal for small scale ongoing projects, new content continues now as a subscription via Patreon.

The goal of the game is to reclaim more than half of the Fort hexes from the Dark Force that has invaded your land. To do this, you’ll roll a single six-sided die to determine the path your army will take. Starting in a specifically marked hex, you will number each side of the hex 1-6 starting on any side you wish. Choose any explored hex you wish to travel from, roll the die, and move in the direction of the rolled number. In the new hex, you’ll write the number you rolled on the matching side (circling the pair), and continue numbering clockwise from there.

If you roll off the edge of the map or into a Mountain space, that army is lost and you’ll permanently block the hex you were attempting to leave.

If you roll a number that doesn’t allow you to enter a new space, you’ll either mark an encounter with the Dark Force, permanently block off an adjoining hex, or both. If you encounter the Dark Forces 25 times you lose. If more than half the Fort hexes become blocked, you lose.

I’ve mentioned before that I’m not enamoured by most print-and-play games, nor most roll-and-write games. Dark Force Incursion has mostly overcome both of those prejudices, but the free version of the game could stand a few improvements. The biggest improvements happened with the newer “Wasteland” design that added tracking boxes for captured Forts and Dark Forces. But these improvements came at a cost. Even before I developed arthritis in my hands, writing caused me a great deal of pain. (Let me tell you how not fun school was.) After a couple of games on the original map designs, I had to stop playing. The Wasteland design has the same number of hexes as the original, but they are even smaller in size. There are a handful of half-sized maps available, which can easily be printed so that the hexes are a bit larger which is nice.

Another well known personal eccentricity of mine is that I’m leery of app version of games. But as I discovered with Welcome To, there are games that are perfectly complemented by them. A fairly barebones app version of the maps would save a ton of paper. Set your starting numbers, tap the hex you want to roll out of, tap the number you rolled manually, it fills in the blanks. Add a virtual die, and you’ve got a standalone version. In-app purchases for the expansions and subscription maps. Boom. Done.

The only other issue I had with the game is finding it. The basic rules and free Mountain maps are available in numerous places around the internet. If I hadn’t dug deeper I never would have found a lot of what is available. There just doesn’t seem to be any unified place for all things Dark Forces. Hopefully, that will change as more content becomes available.

I’ve really enjoyed Dark Force Incursion. I’ve personally signed up for the Patreon and am looking forward to seeing what comes of it in the future. As well, DR Games’ newest solo player project, Rad Zone, is launching on Kickstarter. So I’m also looking forward to checking that one out.

DR Games can be found online at dark-realm-games.blogspot.com or on Facebook as Dark Realms Maps at facebook.com/Dark-Realm-Maps-297212987513285.