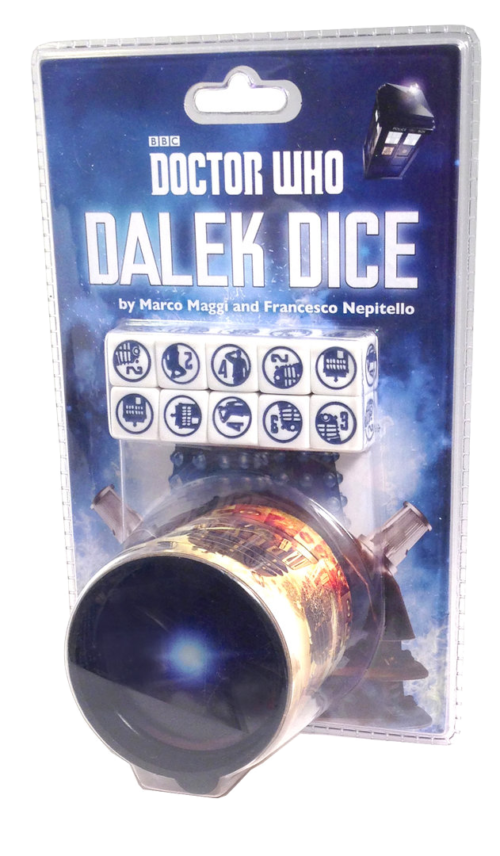 Have you ever just wanted to sell out to alien invaders who want to exterminate your whole planet? I think we’ve all had those days if we’re honest. Right…?

Anywho, there I am at a gaming event with some new friends and we were contemplating what we could play that was fast and easy at the end of a long day. What I pulled out was Dalek Dice.

The container had barely come out of my bag when the comment made was, “oooo a dice game”. It comes in a small dice cup, so there is no mistaking that part.

Gameplay is not hard to learn. Each die has six potential options, The Doctor (a TARDIS), Exterminate! (a Dalek firing it’s gun stick), 2 or 4 Humans, 2 or 4 Dalek. The player rolls all 10 dice, if they rolled any Doctors or Extermiates one of each must be kept and the remaining set aside to re-roll. From the remaining dice, the player can choose to keep any Humans and/or Daleks they want. They must keep at least one die (on top of the kept Doctor and Exterminate! dice), but may choose to re-roll any other dice.

When the player cannot re-roll any dice, or they chose not to, their turn ends. That player must have kept more Daleks than Humans, but they only receive points for the Humans (plus an extra 5 points if they assigned all of their dice). If they ever accumulate three Exterminate! dice, they get to yell “EXTERMINATE!” in their best Dalek voice and end their turn earning points for any Humans, regardless of the number of Daleks they rolled. However, if the player accumulates three Doctors, the Doctor arrives to intervene and they get 0 points. Play continues until one player gets to 60 points, with everyone else having one more roll to finish the round.

Inexplicably, none of the other players knew anything about Doctor Who. They weren’t just “not fans” they didn’t even know what a Dalek was. Everybody STILL enjoyed the game. I think that any game that can be enjoyed without any knowledge of the theme or IP branding, is a solid game. I think the best moment of the game is one player got to 60 points, and the only way to catch them in that finishing round was to roll all Humans and get an Exterminate! Everyone HAD to try but I actually pulled it off for a 62 point win.

This isn’t a revolutionary game. In fact, it’s a pretty standard push-your-luck dice roller. But it’s a ton of fun if you like those games.