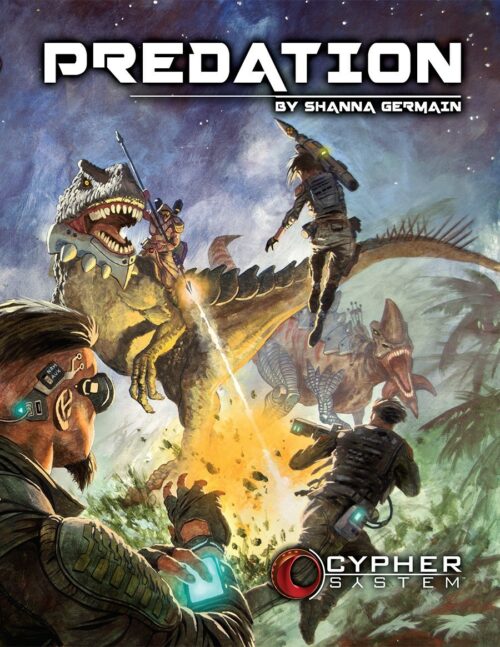 “Who decided it would be a good idea to equip a triceratops with a flamethrower? It’s like being chased by a twelve-ton active volcano with anger issues!”

Predation is not a complete game, it’s a campaign setting designed to be used with the setting-agnostic Cypher System, also by Monte Cook Games. You might want to read our previous review of the Cypher System Core Rulebook before reading the rest of this review, but it shouldn’t be the end of the world if you don’t. The end of the world, in Predation, isn’t for a couple more years anyway.

The story so far is that in the far off future, the company Space and Time Interglobal (SATI) started sending people back into the Cretaceous Period, until one day it all stopped, stranding thousands of people in the distant past. Now, about two generations later, humans and dinosaurs exist side-by-side with each other and technology. Will humanity survive the coming asteroid apocalypse that already destroyed almost all life on earth 60 million years ago?

The first section of the book just gives the setup and some of the fast details that makes Predation unique in how it runs compared to other Cypher System games. The obvious point here, is dinosaurs. The game takes place in the time of dinosaurs, so they are everywhere. Most dinosaurs are designed to high-level creatures that a lone adventurer, even a well-armed one, would be wise to not attack. The second big thing is that every character has a companion. These are, again, usually dinosaurs. Unlike many other game systems, however, these are no mere NPC familiar that just sort of hangs around. Companions have their own stats and personalities and are played almost exactly like a PC, but they are played by a different player at the table, not the owner. In effect, everyone at the table plays two characters, their own and someone else’s companion. The last big change is how Cyphers work. They operate the same as in other Cypher System games, but instead of being a physical object that can be traded away, they are embedded in a player’s own DNA until used.

The second section is all about creating a player’s character. Character creation in Predation works the same as in other Cypher System games, beginning with the statement “I am an [adjective] [noun] who [verb]s”. There are four specific character types to choose from, that were built off of character types from the Core Rules, but designed to help players get the most out of this pre-historic setting. Similarly, players can access most of the descriptors (the adjective), foci (the verb), and abilities from the Core Rules, but there are also new ones for this setting.

A Karn is constructed around the Warrior type from the Core Rules. A Tec is constructed around the Adept type. A Pterex is based on the Explorer type. Finally, an Osteon is built off of the Speaker type. All four character types have access to most, but not all, of the abilities from their Core Rules equivalent. Some abilities are just not appropriate for a Predation game, and are specifically excluded, while other (mainly abilities derived from magic) are allowed but should be adjusted to fit better.

The third section is all about the setting. The game still is on earth, but humankind refers to the lands they inhabit as Grevakc, after the Gre-Vakian c trials that sent their grandparents and great-grandparents back in time. Most of the focus is on the continent of Laramidia, with some mention to the continent of Appalachia, which lays across the Western Interior Seaway. For those who are not Mesozoic geography buffs, The Western Interior Seaway actually existed and ran from Hudsons Bay, south through the Dakotas and Great Lakes, and ended at the Gulf of Mexico. It split what is now North America into the separate continents of Appalachia in the east and Laramidia in the west. We are treated to an expansive gazetteer of the human cities, and the major groups that make up the socio-economic climate.

The final section, is all about using creatures and Non-Player Characters. It includes a decent sized list of specific creatures and NPCs from the CypherSystem Core Rulebook, but also hints on how to adapt others to fit this setting, how to build simple creatures of your own, as well as common creature upgrades a GM might want to give them. It also has stats for a host of unique creatures, and NPCs. Of everything in this section, the Silverback is a messed up piece of work, who I could see pulled in to all sorts of settings.

Ok I lied. There are actually two more sections, the GM’s Toolkit, and Back Matter. They’ve got all the Predation specific details for running a game, and differences to running most Cypher System games. It also has a short adventure, Promised Land. The Back Matter is your index, character sheets, and some great reference material if you want to delve deeper.

Predation delivers all sorts of interesting new twists to the gaming table. Even if you don’t run it as its own setting, there are great things that you can pull into your other Cypher System games for an extra wow factor.