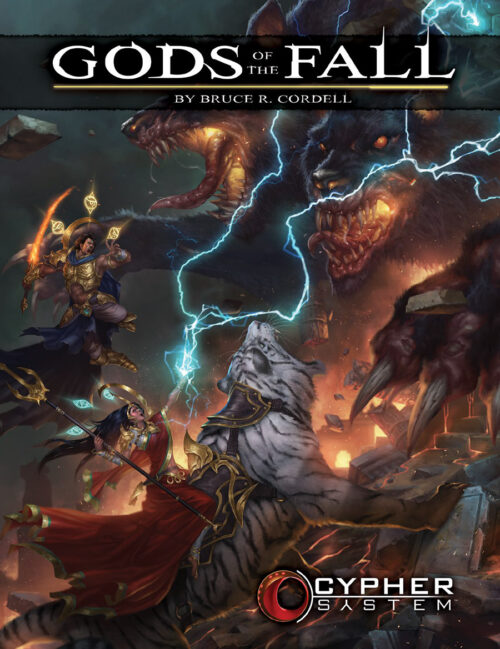 I love the Cypher System. I’ve enjoyed it since I first dug into the first edition rulebook. It presents a truly unique foundation to tell a story at your gaming table. But not everyone wants to create everything from ground zero, so Monte Cook Games started to release a variety of Campaign Settings that opens the door to amazing new worlds. Unmasked brought us the rising of a new breed of superhero stories. Predation blew me away with a collision of futuristic technology in a prehistoric world. Even other publishers flexed their Cypher System muscles with things like Ravendesk Games’ Vurt. I’ve enjoyed everything Cypher that I’ve opened.

Let me perfectly clear here. Gods of the Fall is far from bad. It’s every bit as high quality as everything else I’ve looked at, I just didn’t love it. I don’t have anything specifically critical to say about it, so I’m going to try to look at the setting more generally and in a positive light.

The first half of the book is naturally dedicated to the setting itself. As it is in any rich mythology, Gods are real and ruled over the world. Then Elanehtar, home of the gods, fell. Literally. It shattered into millions of shards (cyphers) and crashed down into the world like a meteor storm. Life in the Afterworld (as it became called) would never be the same. New gods began to arise. Some real, many not. The player characters are destined for divinity, and their adventures will be their legends.

Of all the locations explored in the book, I have to give a mention to The Five Deeps. Picture this: San Fransisco gets destroyed and buried. Years later adventures explore the now-entombed ruins. Below San Fransisco lies the sunken wrecks of a veritable armada of ships dating back to the Gold Rush of the 1800s. That part is actually real (full credit to Scott Sigler’s novel Nocturnal for learnin’ me that), but what if below that there was another layer of buried something even older, and another deeper still, and another. That’s sort of what The Five Deeps is like.

The latter half of the book is the more mechanical stuff, starting with Character Creation. Cypher characters are always built on a specific description format but in Gods of the Fall that has an additional “divinity clause” at the end. So it becomes “I am an [adjective] [noun] who [verbs], god of [dominion]. Depending on the story that the GM wants to tell, they may not want to tell players to add that final statement until well into a campaign. Similarly, the four character types are built from the base Cypher System types: Champion (Warrior-type), Shaper (Adept-type), Destroyer (Explorer-type), and Saviour (Speaker-type). The rest of character creation flows pretty well as any other Cypher character, with the addition of Dominion Abilities that can draw from any pool of points (including bonuses) that a player may have.

The book closes out with a GM’s Tool Kit that includes a selection of NPCs, Monsters, and Cypher Artifacts. There is also a short adventure called Rite of Spring. The monsters range from “traditional” to unique, but the weirdest by far is the Elf Knight. Whatever vision the words Elf Knight just put into your head, toss it out. “The term ‘elf’ is lost to antiquity in the Afterworld” and I’m not even going to try to describe the monstrosity that bears the term in the cavernous Second Deep.

There is a ton of great stuff in this book. Would I choose to set my game here? Probably not. Would I seek out a game in this setting? Also probably not. But there are definitely things here I might draw from in another setting, or even another game. I didn’t love it, but I’m glad I have the book and got to experience it.

1 thought on “Cypher System (Gods of the Fall)”