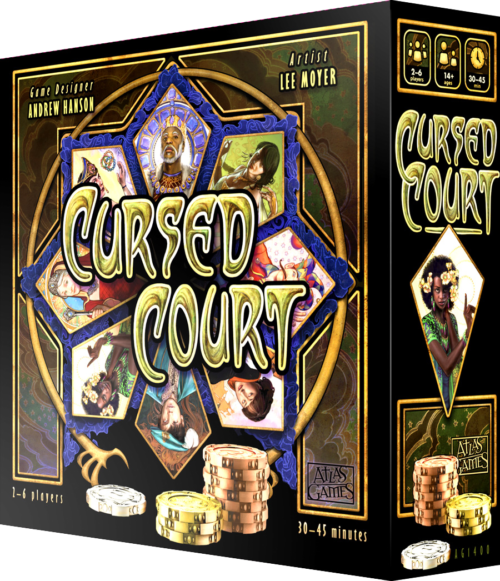 Cursed Court is a short game of bidding and speculation, by Atlas Games, that is themed around the intrigues of a non-specific royal court. Play takes place of three Years (rounds), with each Year having four Seasons (phases).

The board is made up of Noble Regions, which represent the nine Nobel characters that are in the deck of cards, and Set Regions, which each show a unique tableau of three to four Nobel Regions.

The game starts with a card being dealt, face-down, between each of the players. Between them, not to them. Each player may look at the face-down card immediately to their left and right, meaning every player will know what two cards are, and two players will always know what any given card is. Then a single card is dealt face-up and bidding begins. Each player may place a single Wagering Crown on a region. If that region is empty, great. If another player is there, they can add coins to their bid and bump the other player. Bumping can happen multiple times, but each subsequent bid costs double the number of coins as the current bid. A player only has 20 coins per year, so a bid of 11 is un-bumpable. The Season ends when every player has the appropriate number of bidding crowns in play. When the next Season starts, another card is drawn face-up. Now every player knows the hidden card on either side of them, plus the two face-up cards (then three and four as the Seasons progress). Another round of bidding and bumping happens, at the end of the fourth Season all the face-down cards are revealed and scoring happens.

Nobel Regions are scored according to how many of that particular Nobel end up in play. Set Regions score when at least one of each Nobels in that set’s tableau end up in play. Once the score is tabulated, the play area is cleared and another Year starts. The player with the highest score after three Years is the winner.

The first season of a year is often played fairly conservatively, which may leave new players wondering about the point of such a simple game. Then they get bumped and realize how vicious and cutthroat the game really is. Every game I played pretty well went from handshakes to hand-grenades by the third season.

The art in the game is nothing short of beautiful, and the inclusive depiction of the characters did not go unnoticed.

The plastic coins were well molded and gave a pleasant tactile sensation when slamming down a big ol’ stack of them. Next time I play Lunch Money (also by Atlas Games) It’s almost guaranteed I’m going to use these coins for it.

The game is recommended for player ages 14 and up, but I’m convinced that’s only because the tips of the wagering crowns are incredibly stabby. But pack a few band-aids and play this game. It was a ton of fun and everyone left the table with a smile.

You can find Atlas Games online at atlas-games.com or on Facebook at facebook.com/AtlasGames.