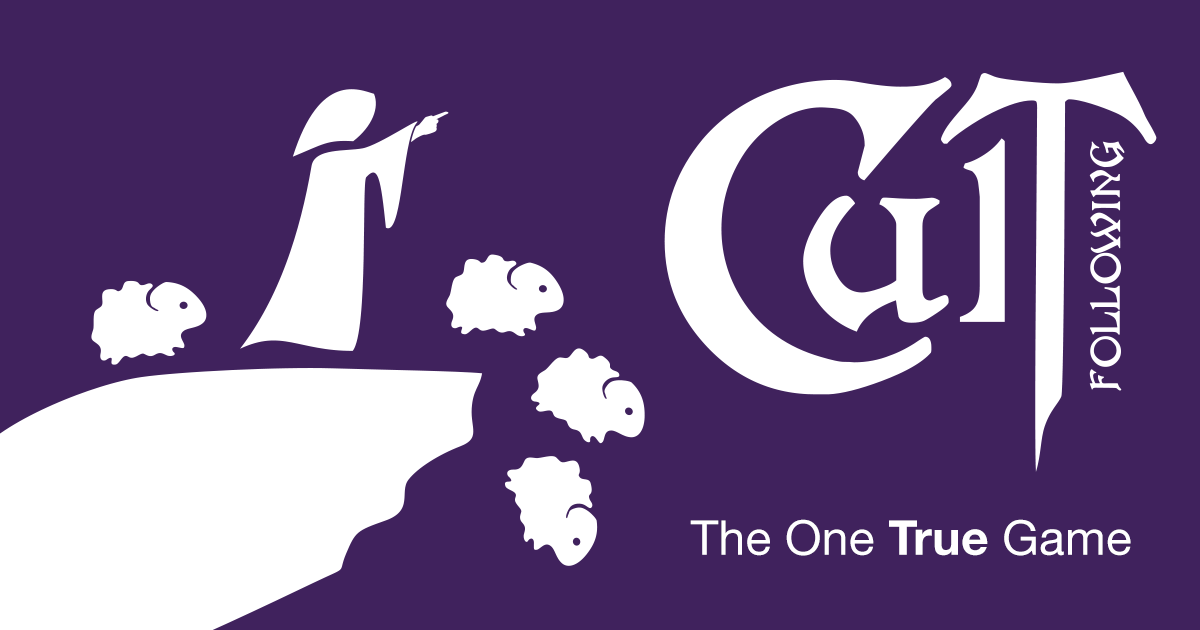 Cult Following is party game of improvised storytelling, in which some of the players are cultists trying to recruit the other players to follow them.

Gameplay is simple and fairly loosely structured. Some of the players will be cultists, they draw five purple Sign cards. Each card has two signs that can be chosen from, giving a total of ten options. That player will choose three of those options from three different cards to create their new cult, discarding the remaining two cards. Meanwhile, Some of the other players will be your potential followers. They draw a single white Question card and wait for their opportunity to ask one of the two questions printed on it.

Each Cultist takes a turn describing their cult in as much detail as they like while integrating their chosen Signs into the description in some way. There is no set format for this, players are free to sell themselves in whatever manner they chose. Personally, I modeled my cult after a distasteful local political figure. (I didn’t win the round, nor did I expect it with that one, but sure did get props for sticking to my choice.) Once each cult has had the opportunity to present their case one of the potential followers asks their question, with each cult having the opportunity to respond accordingly. The cult that does the most convincing job is given that question card to represent a follower joining them, with the player who asked drawing a new Question for later. The round continues until one player’s cult has won over two followers. The winning cult may then decide the fate of the other cults at the table, making up whatever end they want. The game ends when it’s time to leave, time to play a new game, or time to have pizza. Pizza is delicious. It’s literally in the rules.

Beyond the basic structure of the game, creating house rules is completely encouraged. For example, we let potential followers draw however many question cards as they wanted and chose the question they liked best. Maybe the round ends after a cult has recruited four followers. Similarly, there is no set order of rotation to who is a cultist, who is a follower, and who just wants to watch the fun. Improv and roleplaying skills make this an even more fun game, but just because you are a quieter person it doesn’t mean you can’t still play and have fun. Do whatever you want, as long as it’s fun for the group. If you follow our Instagram or Facebook [Both searchable @TheRatHole.ca -dc] you might have noticed we had a player who lives about 14 hours away join us for the game via video chat. He had his own copy and it was a blast. I’m actually not even sure how long we played, people joined in and dropped out between rounds as they wanted. Which, to me, is a hallmark of a good party game.

This game sat on my shelf for much too long, and now that I’ve played it I regret that delay even more. I often have a fluctuating set of games I will bring along to different events, and just let people sit and play them when they have downtime. Cult Following is definitely going into that bag. I know there are a certain demographic of people that will be turned off by the name and theme of this game, but I suggest those people give it an open-minded chance. It’s a fun game.

Out of sheer coincidence, Bravely Told Games actually has a new Kickstarter coming the day this review goes live, so check back here tomorrow for a CrowdFUNding Spotlight on that campaign.

You can find Bravely Told Games online at www.bravelytold.com or www.cultfollowinggame.com as well as on Facebook at facebook.com/CultFollowingCG