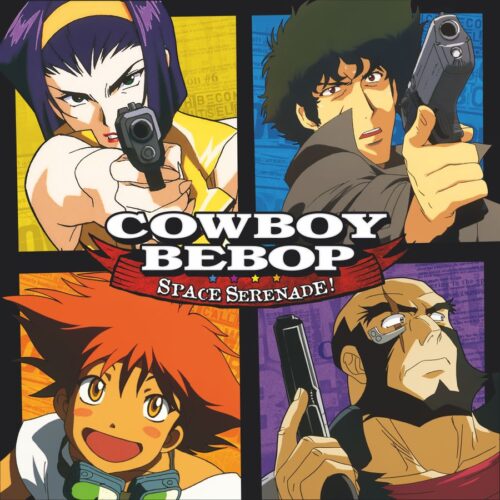 My list of anime shows that I need to watch is significantly longer than the list of ones I’ve had the time to watch. There is no set “top” to the list, it fluctuates by circumstances, but Cowboy Bebop has been on the list for some time. I actually figured my first exposure would be the yet-to-be-released live action remake. But Space Serenade gave me the excuse to track it down now. After all, I should know what I’m playing, right?

The unfortunate timing of this game is that it was hitting shelves just as the apocalypse hit North America. On the bright side, there’s a solid solo mode for times just like this. So 26 episodes and several somewhat lonely games later and here we are.

Space Serenade is a semi-cooperative deckbuilding game that puts the players in the shoes of the motley crew of bounty hunters of the spaceship Bebop. Each player chooses a character from Spike, Jet, Faye, and Ed(&Ein). With that character comes a player board and a starting deck of six neutral Woolong (money) cards and an identical set of four cards, but matching their player colour. Regardless of the number of players, all four characters start the game onboard the Bebop board. The Bebop; along with Earth, Mars, and Ganymede, are represented by separate floating boards that characters will travel between in their pursuit of truth, justice, and a profitable bounty payout.

Each planet* has space for a single Criminal card and a movement gauge that determines how much fuel it takes to move your Character there. (*Yes, we all know Ganymede is a moon. Hush.) Each Criminal is labelled with a specific planet, and an equal number of Criminals from each planet (based on the player count) are shuffled together to form the Criminals deck. The “big bad” for the game, Vicious, then is shuffled into the last three cards of the Criminals deck. Whenever a Criminal is captured or escapes, two more Criminal cards are revealed (one at a time). If a Criminal matches a planet without a Criminal card on it, the drawn Criminal goes there. If there was already a card there, the Movement Gauge goes up one and the Criminal on that planet could escape (to be replaced by the new card). When Vicious’s card is revealed, things change a bit. Any remaining, discarded, or escaped Criminals are reshuffled to create a movement deck for Vicious. If he takes damage in a turn, a card is revealed and he potentially moves to another planet.

The deckbuilding aspect of the game is pretty standard. Draw your hand, use the resources in that hand, discard played and unplayed cards, draw a new hand. Woolongs are spent to buy new cards from a common purchasing area. Clues are used to take Investigation tokens off of a Criminal. Strength takes a Resilience token off a Criminal, but the player takes a Wound card for each Resilience token. When a Criminal has no Resilience or Investigation tokens left, they are captured. Resources not spent during a player’s turn are lost at the end of their turn, with the exception of Fuel. Fuel is accumulated and spent on the player board and is (usually) used to move to new locations. Cards purchased from the common deck are placed into the discard pile but can include any number of fun actions or abilities, including moving another Character. Each Character has unique abilities but can share one of them when another player is at the same location. Remember when I said all four Characters are used, regardless of the player count? Now you know why.

Solo rules are nearly identical, but with a few extras to speed the game up. For example, Vicious moves at the end of every turn, not just when he loses Resilience. If Vicious’s movement deck runs out, he escapes. In a solo game, the player loses. In a group game, the player with the highest score (from capturing Criminals) technically wins, but really everyone loses. Please play again.

As I mentioned, I can only play this in Solo mode for now. Often the Solo rules for a game feel a bit like an afterthought. Things like just playing more than one character are common. The solo mode here doesn’t feel quite as blatantly tacked on. You can move other players in a regular game, in the same ways and frequency, that you can in a solo game. The Common deck doesn’t cycle as fast with only one player buying cards, but that is largely countered by running down the Criminals/Movement deck faster to increase the tension.

Most of the art is what you’d expect, being lifted from the original series. The game comes with a set of unpainted plastic minis, but also a set of cardboard standees, incase you want to paint and display the minis. The production quality is definitely above average, with the player and planet boards being double thick, with recessed areas for things like tracking fuel. The most interesting detail, for me, was the Criminal deck. Rather than just being another deck on the table, it sits on a mostly verticle stand, with the stand and card backs made to look like a video screen featuring the hosts of Big Shot, a television show for bounty hunters, that is a bit like America’s Most Wanted but also featuring the bounty for each crook’s capture. It’s a small detail, but a nice way to integrate that aspect of the series.

Not knowing when everyone will be able to play in group games again, I don’t know when I’ll get to try playing like that, or if I’ll be able to write about it when I do. But for now, this is a great option to play alone until you can safely get a group together. (It’s also a great excuse to watch a great show, but that’s another article.)

As a bonus, here’s an amazing live cover of the Cowboy Bebop theme I came across by the J-Music Ensemble.