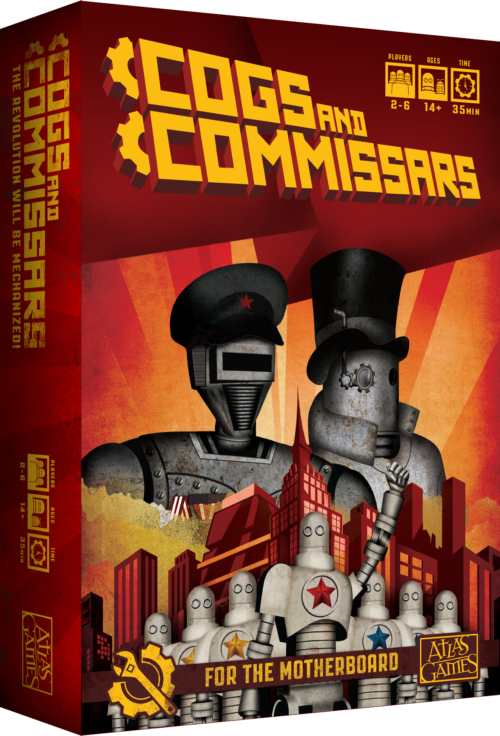 Cogs and Commissars is a great take that card game that draws inspiration from soviet Russia; and in Soviet Russia, card game takes you!

That joke was totally for our older readers. But if Yakov Smirnoff was still doing standup comedy, he’d be a meme for sure. Maybe I should start over…

Cogs and Commissars is a great take that card game that draws inspiration from Soviet Russia, and also, robots. It’s great fun! The goal of the game is to gather enough citizens to lead a revolution, 15 points worth of citizens to be precise. There are three types of Citizens that you can gather: the Proletariate is worth 1 point, the Bourgeoisie is worth 2 points, and a Commissar is worth three points. Most cards will reference each type(s) of Citizens specifically by name. So while three Proletariate have the same value as a single Commissar, they are not interchangeable in the way you might “make change” in other games.

Each player has their own deck of cards that they play with, built in one of three ways. There are six “prebuilt” decks that keep the game balanced, but for a more strategic challenge the decks can be built using a drafting process, or for a more chaotic experience, they can be dealt out randomly. There are also six Faction Leaders (one per prebuilt deck) that can optionally be used, each with their own individual abilities.

Once everyone has their deck, and have given it a good shuffle, play begins. Each player’s turn consists of four phases. The active player starts by Producing Two Citizens. They flip over the top two cards of their deck and will receive the appropriate Citizens marked on those cards. After that, they can discard any cards they wish, from their hand, and then draw back up to seven cards. A player could potentially end their turn or start their turn with additional cards but must end this phase with no more than seven. From there, they may play as many Propaganda cards as they like (enticing a Proletariate Citizen away from another player) and a single Action card. There are also Blitz cards that may be played at any time, in any phase, on anyone’s turn.

When a player has at least 15 points worth of citizens they are able to play the Revolution card if they have it in their hand. There are numerous ways that the other players can counter or prevent the Revolution from succeeding, but if the player has over 20 points they have enough Citizen support that it simply can’t be countered at all.

We had a few specific card interactions that were a bit difficult to work out, but generally, this was one of the fastest games to learn that I’ve played in some time. It was so quick to pick up that we were all taken by surprise at the amount of (friendly) take that play, and just how much it extended the playtime. The artwork is amazing, perfectly blending the feel of vintage CCCP propaganda art and robotic imagery appropriate for the same era. The Leader Cards have glorious portmanteau names, playing on famous Russian leaders right up to ComPutin… Painfully punny.

I knew this game would be fun. There have been very few titles from Atlas Games that I haven’t enjoyed over the years. But I was still surprised at just how much fun this ended up being. I may have issues down the road if my players keep wanting to play this instead of whatever review I’m working on. But that’s a personal problem, and honestly a good problem for a game to have.

The Revolution will be mechanized when you find Atlas Games online at atlas-games.com or on Facebook at facebook.com/AtlasGames.