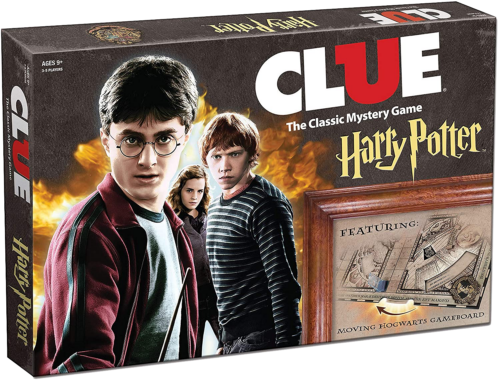 My good friend Trenton is a fan of all things Harry Potter. He is an expert in everything: the books, the movies, fan fiction, merchandise, everything. So when we decided on a game day this month, he surprised me with a still factory-sealed copy of Clue: Harry Potter. Clue (aka Cluedo) is one of those classic games that everyone knows, or at least recognizes, so much so that you would think there is nothing new you could do with it. But this is a game by USAopoly, creators of dozens, if not hundreds, of novelty versions of Monopoly, Yahtzee, Risk, Trivial Pursuit, Chess, and, yes, Clue.

This version of the classic Murder Mystery takes a turn away from the Murder theme. We are told that there has been a kidnapping from the halls of Hogwarts, and it is the duty of the victim’s fellow students to find who did it, where and with which Dark Magic spell, potion or artifact was it done? If you find the answer in time, then the student can be saved; if no one guesses correctly, then the victim is vanished forever! The first noticeable difference here is that we don’t have the same victim every time. There are 6 characters in this game: Harry, Ron, Hermione, Luna, Ginny, and Neville; up to 5 of those characters can be players, but one of the unchosen characters is our poor victim. The next significant change is that the players are not the suspects. Instead of having players accuse each other of the crime, they choose from a list of familiar Potterverse villains. And of course, you can’t have anything happen at Hogwarts without House Points. Players are given a set number of House Points at the beginning of the game, depending on how many players there are. Dark Forces are at work, that can remove those points. If at any point a player loses all of their House Points, they leave the game immediately. They can no longer move on the board, make guesses, or make accusations. But they are still required to provide clues for the remaining players. If, by bad luck, every player loses all of their House Points, then the game ends with no winner.

The most striking element of Hogwarts (at least visually) is its collection of moving staircases, hidden doors, and secret passages. So of course, the board here is not your standard sheet of cardboard. Each corner of the board has a wheel that represents one of the four Hogwarts Houses. In addition to the numbered move dice, there is one Hogwarts die. If the die lands on one of the House crests, then the wheel for that House moves one notch, which potentially opens and closes room doors, reveals or hides Secret Passages, or can even reveal the dreaded Dark Mark, triggering unpleasant events that will either use up your House Points, or take away useful allies and items.

Hogwarts is a dangerous place, but even the staff wouldn’t leave a criminal investigation to the students alone. The opposite of the Dark Mark is the Star. The Star, which is found both on the Hogwarts die and on various squares of the board, gives you a Help Card. This card could be an ally or an item that can protect you from the effects of the Dark Mark events. Help cards stay in your possession even after they have been used, unless they are taken away by an event.

Now that we have gone through what makes this game unique, we can get back to basics. In addition to one Help Card, every player starts the game with Mystery Cards (Suspects, Locations and Items). During game setup, one of each card type goes into the Solution Envelope. The remaining cards are divided evenly between the players. A player is allowed to look at their own cards, marking them down on their clue sheet. Players also use their cards to answer another player’s Suggestions. When a player makes a Suggestion (which is different from an Accusation), they declare, for example, “I think Draco did it in the Owlery with the Vanishing Cabinet”. The player to the left must reveal if they have a card with Draco, the Owlery, or the Vanishing Cabinet. If that player doesn’t have the card, the next player is asked, and so on. A Suggestion can be made inside any room, and you can only use the room that you are in; on the other hand, you can only make an Accusation when you are in Dumbledore’s Office. An Accusation is a serious thing, because if you are wrong, you lose immediately. There are no second chances.

I have to make a confession here. This game requires 3 – 5 players, but Trent and I were playing alone. Our solution? Each one of us controlled 2 separate characters. This worked surprisingly well, but only because we both had extensive RPG experience, and thus were skilled in being able to separate “what I know, versus what my player knows”. This isn’t the ideal way to play, and I wouldn’t recommend it, but it did work. At one point, both of Trent’s characters were “out” so I just handed him one of my two characters (including the clue sheet) and continued from there. In the end, both remaining characters were “taken out” by a Dark Mark event, so there was no winner. A bit of a disappointment.

This was my first themed version of Clue, and it was more complicated than I expected. But all in all, most of the changes have a positive effect. The secret passages are fun, and add strategy to the game. The Allies and Items are technically only there to save you from the Dark Mark events. I’m not sure how I feel about the Dark Mark element. A bit of chaos always makes things interesting, but the fact that there is a constant risk of losing “HP” and no way to get more can get stressful. And of course, no one likes a game where no one wins. If you are a Harry Potter fan, and you like to be a bit more hands-on with your fandom, this can be a fun activity to play. But it probably wouldn’t be the first thing I’d grab, at a Harry Potter event or a Games Night.

USAopoly can be found online at www.theop.games and on Facebook at facebook.com/theopgames.

[Editor’s Note: TheRatHole.ca in no way supports the despicable opinions and comments of JK Rowling, in regards to Transgender people and Trans-rights. We have unwavering support for all members of the LGBTQ+ community and there are many more people involved with the creation of this game that feel the same. My (Dave) personal opinion is that Harry Potter has no author and sprung magically from the aether, but we recognize that our followers may feel differently. Spend your time, energy, and/or money as your heart tells you.  -dc]