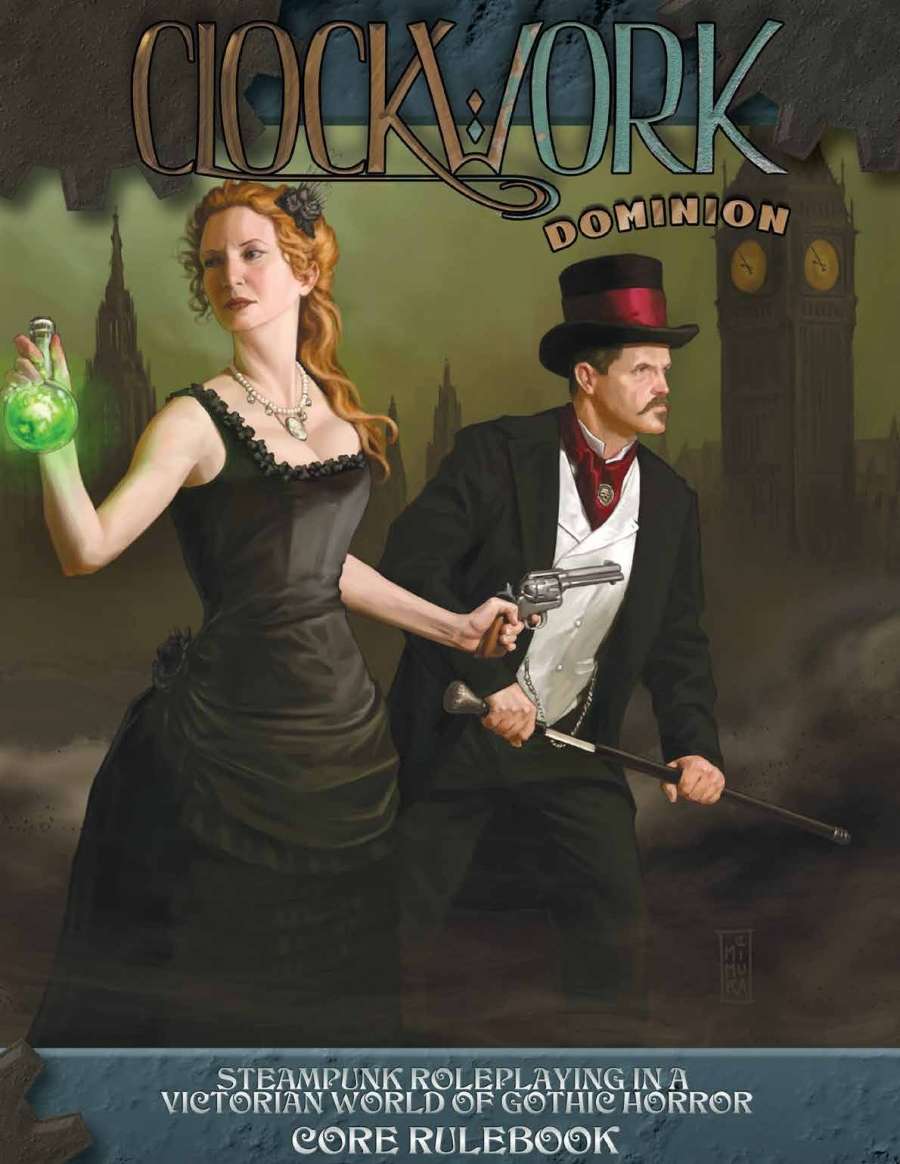 Clockwork: Dominion is billed as “Steampunk roleplaying in a Victorian world of gothic horror.” It has some incredibly unique mechanics and builds a beautifully detailed world that seamlessly blends legitimate history and period writings with the fiction of the game. Drawing from traditional-Abrahamic and apocryphal religious texts, world folklore, and all manners of Victorian writings from scientific to fiction, Reliquary Game Studios has managed to create a completely authentic feeling steampunk version of 1896 England.

Nothing in this book is quite like any other RPG book I’ve read. One of the most obvious, and interesting, differences is the order in which information is presented. Most RPGs will keep the introduction to the world the game is played in brief, with just a few pages to give the framework before delving into the rules. Usually somewhere near the end of the book is where you get the more detailed look at things. After the introduction, you usually get character creation, your player-level rules, rules for the person running the game (the Narrator in this case), and finally whatever worldbuilding fluff the designers want to add in to fill out the page count a bit.

Clockwork: Dominion STARTS with the worldbuilding. Every detail of Clockwork society is laid out. The British class system, Victorian etiquette, daily life in London, the seasonal migration of the aristocracy to their country homes, colonial rule, and the world beyond the British Empire, all get touched on in surprising detail. As I mentioned before, the fiction and facts are so thoroughly entwined that it’s nearly impossible for the average person to be completely sure where one ends and the other begins. Similarly, The chapter surrounding religion in the Clockwork is more clear in its overall fiction, but it remains no easier to be sure which bits are gleaned from real-world texts, and which are completely made up.

Of course, not everything in Clockwork: Dominion is based on legitimate history, but that doesn’t make the chapter on Cosmology any less fascinating. Religion throughout most of the Clockwork is heavily based on a blend of Abrahamic faiths (Christianity, Judaism, Islam, Bahá’í). That influence is extremely obvious, but I’m not well enough versed in all four, nor in the vast number of non-canonical religious texts of the era, to know exactly where the line between the inspiration and creation actually is. I suspect there is more fiction than inspiration in this chapter, but having that level of detail and legitimacy in the previous Society chapter works well to further obscure the line between them here. Other areas in this chapter are easier to separate, however. Creatures derived from myth and lore, like Fey and Chimera, are slightly more obvious in their unique interpretations than in other areas of the book.

Chapter 4 moves into the actual game, with Rules and Systems. Things start rolling with some definitions of narrative time. The naming conventions for different measurements in an adventure is drawn from Victorian serialized fiction. A Series is a complete story, usually comprised of multiple Books. Books are broken down into Instalments, which include one or more Chapters. Within a Chapter, you have a Scene, in which characters complete a Sequence of events made up of Turns. Knowing those terms is important to grasp, but more important is the core mechanic of the game. Resolving tests, be they social or physical, isn’t done with dice like in most RPG games. Tests are resolved using a custom 100 card deck. Each card has a value from +5 to -5 that is used as a modifier for the specific combination of traits used during a test, to determine if the character is successful or not. That same deck is used to determine the sequence in which players (and Narrator controled characters) will act. It is also used to assign conditions on characters, and a variety of other things. It’s a fascinating system and you can download a set of artless printable cards for free, or buy a proper set of them. I bought the pre-printed deck, and they are well worth the fairly small investment.

At this point, we find ourselves a full third of the way into the rulebook before hitting Chapter 5 on Character Creation. Think about that for a moment. This game is designed in such a way, that it is more important to understand the world you are playing in, than the process of building the character you will play in that world with. That’s not saying that the characters aren’t important, it’s just interesting to see the gaming experience framed in that way.

Chapter 5 gives all your general character building things, with Chapters 6 and 7 focusing on the finer details of those characters, their “stuff” and their additional (supernatural) powers if they have them. Chapters 8 and 9 contain all the information needed for the Narrator to create a story and run the game. The chapter on creating Allies and Antagonists is extra interesting, with creature examples drawn from across the globe. I have a personal affinity for Kelpies, but seeing even more obscure (to the average North American player) entries like the Muldjewangk of Austrailian Aboriginal lore, is always a pleasure to see in any game.

Overall the game has a great feel and depth to it. But the rulebook itself isn’t perfectly polished. There were a few points throughout that could have benefited by another pass by a different editor. Mostly for things like clarity and ease of reading, but nothing game-destroyingly bad. The most awkward one (which is why it stuck in my head) is the default player gender throughout most of the book is female, which didn’t always feel right. I applaud the use of non-male pronouns, just to be exceedingly clear, that’s something that is both good and important. But there were a few moments where “she” specifically felt wrong in the given context. Saying “she” (the player) did such-and-such thing is technically correct, but reads wrong when it was just pointed out that it was a thing a female in the game would likely never do. There is one point where they describe a player who came to the table as someone’s companion, (sister, brother, significant other, etc). By using “she” to describe this hypothetical player, it actually felt like the exact sort of belittling, misogynistic, b.s. that they were trying to avoid by using it as the default to begin with. I love that they wanted this to be inclusive, I just wish they had gone a bit more neutral in a few places. Pronouns are something I hate to see inadvertently detract from a point because they are important and powerful words.

The visual design of the book was also beautiful. The background textures were a perfect fit (except one tiny line near the binding that continually made me think a hair had fallen onto the page). Most of the original artwork was absolutely stunning. So stunning, in fact, that the handful of public domain images stood out like an awkward teenager.

This game is fascinating from start to finish. I lost track of how many times I removed “fascinating” from sentences in this article because it truly is the most fitting word to describe just about everything here. I’m not sure I’ve ever come across an RPG book that didn’t have one or two moments that seemed out of step, no matter how large the publisher, so even though there were things I didn’t care for they were all basically tiny things that have no particular impact on the otherwise high quality of this game, and world it creates.

If you still aren’t sure about investing in this great game, they have a Resource Page that includes a free set of quickstart rules with an intro adventure and pre-generated characters, as well as other great things. So go check it out.