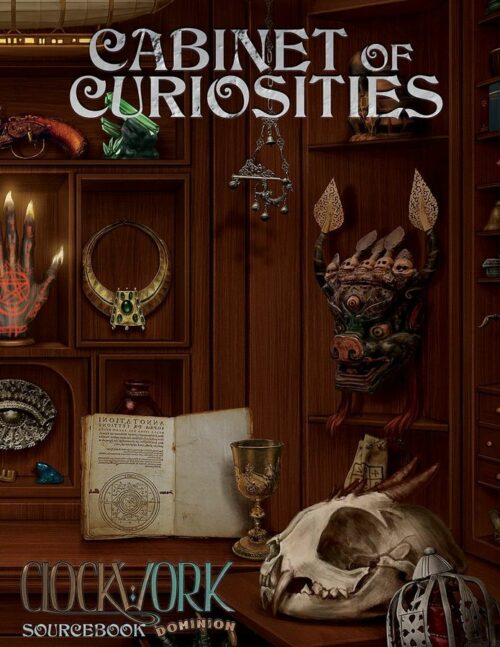 Tabletop Roleplaying Games are a unique beast to review. A card game might be played in a few minutes. A fairly substantial board game can usually still be played a single night. But the process of reviewing a TTRPG is much longer. A core rule is probably 150-400 pages, same for a followup sourcebook. A single adventure might only be 20-60 pages but is going to be challenging if you haven’t gone through (at least) that core book. It takes time and lots of it. That’s not even counting time to prep and play.

I won’t claim to “have it down to a science” but even when you have a process, some games just force you to throw it out the window. Clockwork Dominion was, and is, one of those games.

You really should read the full review of the Clockwork: Dominion Core Rulebook. A year after I wrote it, my opinion hasn’t changed, but for a speedy summery, this was my opening paragraph:

The Cabinet of Curiosities is the first sourcebook for the Clockwork: Dominion RPG and does an amazing job expanding on several areas of the Core rules. Because of its focus on expanding and adding to the already impeccably created world of The Clockwork, there are some times where it puts function over form and seems to lose track of whether it’s trying to tell the story or explain the rules. However, once you get a bit deeper into the book that oddity of the writing becomes accepted in your head.

The book itself is split into three Chapters. Wisdom and Witchcraft, Steal and Steam, and finally The Cabinet.

Wisdom and Witchcraft focuses, fairly obviously, on the different magical traditions in The Clockwork. This is the section that had the hardest time balancing the narrative and the rules, yet it still has some truly inspired moments. For example, religion in the legitimate Victorian Era was extremely important in most aspects of society. The ways that this game draws from those religious views and reframes them into something that feels both legitimate and too fantastic to be real is incredible. One of the many magical traditions presented is Ecclesiastical Magic. The Book of Common Prayer, which even today is one of the most used books in the Christian faith, is referenced as an ecclesiastical grimoire. Similar texts are mentioned from other religions as well, to still further blend fact and fiction. The chapter goes on to deal with numerous way that magic can be integrated into your game.

Steel and Steam breaks down the scientific innovations of the day starting with the various Prodigies and Madmen that lead there in their respective fields. This section is the one that actually matters when the game takes place. Narrators are welcome to put their games wherever and whenever they like, but the rule books are set specifically in the year 1896. Why that is important is that important scientific figures, such as Alexander Graham Bell (1847-1922) and Nicola Tesla (1856-1943), were alive and actively working on their respective discoveries at this time. Where things get really interesting is figures like Ferdinand von Zeppelin, creator of the rigid airship design that bears his name. Many of the facts of his life and creation are perfectly accurate, but other details have been shifted well ahead of their legitimate historical occurrences.

This section also creates more detailed rules for larger vehicles, like Zeppelins, that require more than one character to operate; combat between vehicles both big and small; and Item Creation rules.

The final chapter is The Cabinet. Broken down into sections for Setting Options, Conflict Options, Character Options, and Narrator Options, this chapter brings to life many of the unique and potentially obscure aspects of The Clockwork. It covers everything from outbreaks of disease, to gambling, to new skills, vocations, and organizations that can enhance a Narrator’s story and the Player’s character choices.

Reliquary Game Studios has been taking its time in growing this product line. The downside to that is that there is less out there for players to feed off of. But the upside is that the care and research that is going into writing this game really shows. Their next major release is Highland Spirits, which will have 114 pages of settings and story, and is slated for physical release by June. From everything I’ve seen from them so far, and everything I’ve read about this new book, I’m extremely excited to get my hands on it. They are hard at work on the following Clockwork Dominion release(s) and a completely new game that looks to be every bit as groundbreaking as this one.

If you still aren’t sure about investing in this great game, they have a Resource Page that includes a free set of quickstart rules with an intro adventure and pre-generated characters, as well as several other great things. So go check it out.