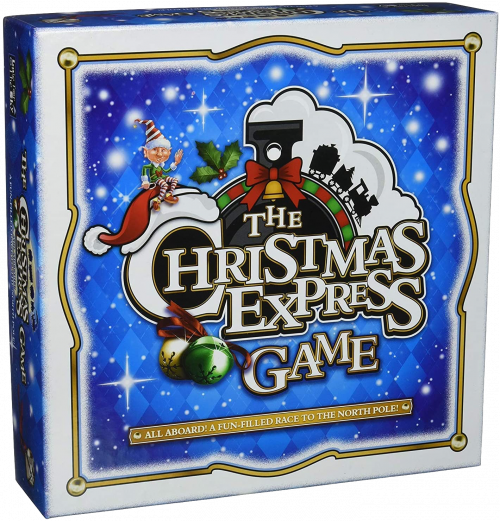 The Polar Express, The Holiday Express, and yes The Christmas Express. The nomenclature may change by region, or by intellectual property rights, but the idea of an old train steaming its way across a winter wonderland is as old as the iron horse itself. Sometimes it’s the basis of fiction, sometimes it’s something more. In Canada, the CP Holiday Train raises millions for foodbanks while bringing cheer and music across the country (This year they will be holding a virtual “Holiday Train at Home” charity concert on December 12).

But today we are talking about The Christmas Express Game from Outset Media. Christmas is normally a time for family gatherings and family games, with this one landing squarely at the young end of the family game spectrum. (It can even be scaled back for even younger players.) Pretty well everyone has played some form of Snakes and Ladders in their life. Once a child gets past the “match a colour and move” level of games, “roll, count, and move” is often the next step. Christmas Express is another step up from that: play a card, count, and move. But there’s more to it than just that.

On a player’s turn, they can play a single card, moving that many spaces, or play three-of-a-kind and move to the next Station space. The stations are 20 spaces apart, and the highest card is a 7. This works well to help young players determine critical thinking skills and develop strategy. Three 1s will almost always be a good choice, while three 7s will almost never be advantageous. (You can potentially win using three-of-a-kind).

Instead of a normal movement card, there are also half a dozen special effect cards that can boost you ahead or pull other players back, which can turn a very innocent game oddly cutthroat. HUSTLE BUSTLE is a blue-shell card (to make a Mario Cart reference), it moves the lead player backwards and the person using it to move ahead. I’m not sure why they would want to, but the lead player can never play this card. EXPRESS moves you ahead and skips the next player’s turn. (Especially nasty with two players.) SNOW STORM moves every other player backwards. NAUGHTY ELF moves any player to the Upper Bridge space, which acts as the “snake” part of Snakes and Ladder, sliding that player back down to the Lower Bridge space unless it’s occupied. REINDEER CROSSING cancels a three-of-a-kind and it becomes the cancelling players turn. Finally, SANTA cancels any specialty card.

“Well, you would have won if you hadn’t run afoul of eight little reindeer at a Reindeer Crossing. It’s my turn and I take the Express to the North Pole for the win!”

Holiday gatherings can be a great time to bring non-gamers to the table, even if that means playing lighter games. I honestly feel that if you can embrace the spirits of the season (and no “spirits” was not a typo), even super light games like The Chrismas Express Game can still make for a fun time with the adults after the children are nestled snug in their beds. Enjoy your family time, then ladle yourself a cup of your mother’s family eggnog recipe and have yourself a merry little game night.

Another tradition here in The Rat Hole is ending these holiday reviews with a song. This year I wanted to go back in time a bit, so here it the original version of Santa Baby by the incredible Eartha Kitt: