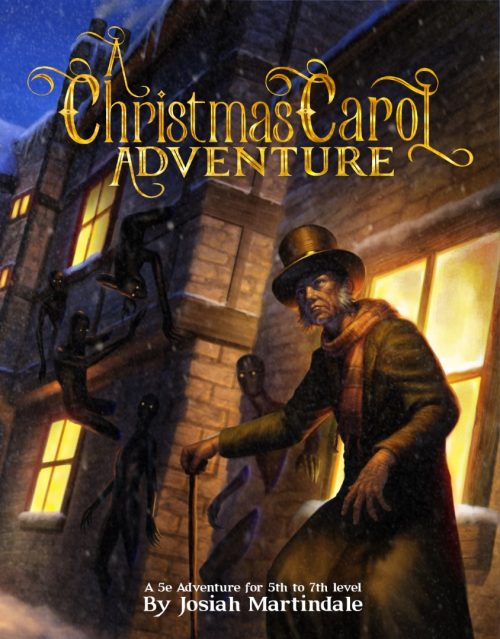 I’m Colin, 30 years old and been playing 5e for ~4 years now. Never had a group to play with until a friend of mine started GMing Lost Mines of Phandelver followed by Curse of Strahd. I absorbed the source material, read a lot of articles, ran of few One-Shots, and have been doing my own homebrew campaign for about a year (so far levels 1-10).

First of all, Josiah Martindale’s A Christmas Carol Adventure –the product– is very good quality. The physical book and maps are on nice, thick paper, and the illustrations are fantastic. Even better, it’s all helpfully organized:

The encounters are fun and non-standard. You don’t win by bashing your enemies to zero before they can bash you – something beyond hit points is required to win. Plus they’re thematic – the win conditions are based in the original story.

My major gripe is that the boxes of expository text are too long. I’ve seen complaints that WotC products have long boxed text, but this adventure has boxes that take up more than half a page. It hurts the game flow for the GM to be doing such long pieces of exposition. The tips in the adventure say that nothing ruins immersion like the GM losing eye-contact with the players while reading a script, and then almost guarantees it if you use the given text.

I have a few more comments, but they include spoilers if you’re planning to go through this as a player, so this is a warning for non-GMs.

My second major gripe is that the skill challenge to run across town lacks variation. The barebones version just says do four DC12-15 skill checks with a possible shortcut. The detailed one has a series of three Athletics checks and a Dexterity Saving Throw. It’s also lacking on the consequences of failure apart from costing the players time, yet they have to arrive on time to continue the adventure. Lack of variation is difficult to draw inspiration from, and lack of consequences make this section weaker than the rest. I would suggest that the GM do some work on inventing more varied checks/challenges, or having the players invent their own obstacles.

The final encounter is a low-CR Lich. This is the most complicated monster in the book to run, yet lacks information on what it should be doing on its turns. The other two encounters are great, describing what the monsters should be doing and what their goals are. I would recommend checking out the Lich article on themonstersknow.com for guidance, keeping in mind that its less fun options (i.e. the ones that remove/disable a PC) have been removed from its stat-block, and the Lich probably doesn’t consider the PCs a threat until they go for the real phylactery. This monster was an awesome final boss, just take care to run it with an appropriate pacing for the party to realize what they need to do.

For all encounters, I’d suggest having Scrooge mutter to himself at the end of each round, giving a hint at what the players need to accomplish so that they don’t become frustrated/stuck. Readily accept other methods/checks that sensibly accomplish the goals, even if they’re not laid out explicitly in the book. Odds are the players will come up with an even better solution, as they tend to do.

Oh, and I was skeptical of the race against the clock part with the bells countdown, but it ran really well. I ran it exactly as written in the book, and I believe it will be hugely successful as long as you have at least one excited player. Definitely a highlight of the adventure.

All-in-all, it’s a fun adventure to run and play. The story is well adapted, and I’m pretty sure that’s why the boxed text is so long. Do your best to summarize those boxes and it should run smoothly. The encounters are fun, the skill challenge needs work from the GM side, and the payoff at the end left my table quite happy.

You can find Verge Games online at vergegames.org or on Facebook at facebook.com/VergeGamesKC.

Short Bio: I’m Colin, 30 years old and been playing 5e for ~4 years now. Never had a group to play with until a friend of mine started GMing Lost Mines of Phandelver follow by Curse of Strahd. I absorbed the source material, read a lot of articles, ran of few One Shots, and have been doing my own homebrew campaign for about a year (so far levels 1-10).
____________

If you’ve read our previous Holiday Reviews, you already know that we always end them with a bit of cheer in the form of a song. This year seems to be the year of really obvious options and so today we present for your approval, a little something from A Muppet Christmas Carol: