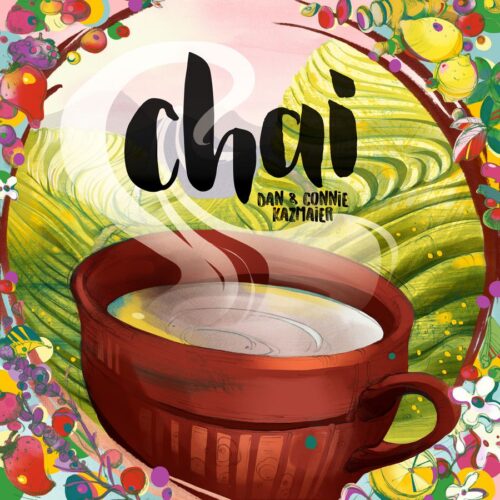 Full discloser here. I love Chai. I got to play a demo copy before talking about the original Kickstarter. I personally backed it, and have gone to a handful of events demoing it. In all of that time, the one thing I had never done, is to find the time for testing out the solo rules. With the current social distancing requirements, and a new Kickstarter to reprint the deluxe edition plus an expansion, the timing seemed perfect.

I’m going to start with something different for me. I’m going to start with my main complaint. The solo rules are about as clear as mud. Enough so that even with my existing knowledge of the regular rules, I had to go searching for clarification on a LOT of things. I hope I can go deep enough into the rules in this review, to help other people avoid some of that work. So let’s look at the three (yes, THREE) solo modes for Chai.

The first mode is simply labelled Solo Rules in the rulebook. This version is a basic beat-your-score variant. First, set the play area up for a two-player game, although the second “player” won’t require a player board, just the appropriate tea leaf tokens. The solo-player starts with a gold (3) coin, and at the end of their turn the thermometer round tracker is increased by one hash mark for a total of ten rounds (instead of one temperature mark, which is two hash marks, in a normal five round game). There is no AI player, so if the player wants to fulfil an order of the other colour they simply pay a bronze (1) coin to the bank (instead of the other player). At the end of the ten rounds you add up your score and compare it to the chart in rulebook. Play again and try to beat your score.

This version is very interesting, compared to normal play. Even though a regular game only lasts five rounds every extra player causes the market, pantry, and even the customers, to cycle much faster. But the challenge here is that none of those things happen without the solo-player’s direct actions.

The second mode is label as Co-op Rules, and can be played by only one player or multiple players. For solo play, you set up the play area as you did before. The AI chaiwala still doesn’t require a player board, but I like using one as an obvious place for their fulfilled orders. When fulfilling an order using another colour tea token, neither the player (or players, in a multiplayer co-op game) nor the chaiwala need to pay to use the correct tea token. On their turn the chaiwalla ALWAYS fulfils the customer order worth the lowest number of victory points (or the highest number in multiplayer). At the end of a normal five rounds, the chaiwalla compares their score to the solo-player (or combined group of players) to determine the winner.

This version is definitely more challenging. In both of these versions you need to be fast and efficient. Normally you have a bit of time to build your “economic engine” but not here. You always know what order the chaiwalla will fulfil, but one thing that’s missing is how the AI breaks a tie. I houseruled that the chaiwalla will always fulfil their own type of tea first. I also slid remaining customers away from the customer deck ( putting the newly drawn cards closer) and in a choice between two of the same points and tea the chaiwalla fulfiled the one farther away from the deck.

The last version is the Solo Dice Deluxe Rules. This variant is not in the main rulebook, and will not be included when the retail edition hits shelves later this year. (I presume it will also get packaged separately to sell at conventions and online, but that’s strictly a guess.) The rules are on a pair of cards and uses a pair of custom dice to determine the AI actions. Once again, the setup is for two players, and the chaiwalla DOES require a player board this time. Both the player and chaiwalla start with a silver (2) coin and no starting customer in their shop. On the AI’s turn, role both dice to determine the chaiwalla’s actions. Each die has a gold/silver/bronze coin face, a wild market/pantry item face, and a checkmark on the last face. On a coin, they collect that coin. On a resource, they take that resource from the bag. All pantry and market items are considered wild when the AI is fulfilling an order. If a checkmark is rolled the chaiwalla fulfils the lowest order available.

This version is the most challenging on a few different levels. The chaiwalla often breaks some of the normal player rules, but this usually balances itself out since they also only ever get a maximum of two resources, even if that ends up being one market and one pantry. Similarly, they can rake in a lot of money very quickly on a lucky roll. (…or should that be an unlucky roll?)

Chai is an amazing game, it is honestly one of my favourites of 2019-2020. The current Kickstarter campaign says The High Tea expansion will be compatible with all the solo rules, and there is a video focusing on solo play already filmed and coming soon. I’m hoping all this means we’ll also see a re-written set of rules, because all three variants are MUCH better than what’s currently on the page.

You can find Steeped Games online at steepedgames.com. or on Facebook at facebook.com/steepedgames.