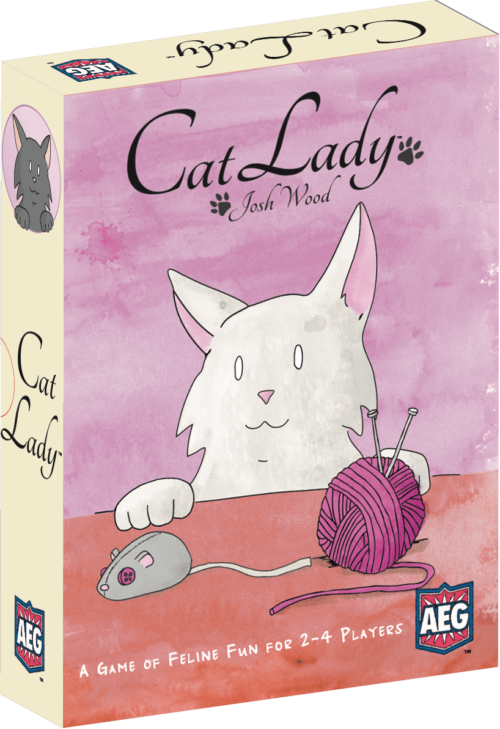 Have ever wanted the experience of owning cats without the negatives — No smelly litterbox, no expensive vet bills, no surprise hairballs in the middle of the floor? Well, for about the price of one trip to a Cat Cafe, you can own a copy of AEG’s Cat Lady and compete with your friends to get the best collection of cats. Please note there is no Crazy in the title of this game. The object isn’t just to hoard kitties, you have to care for them properly too, with food, toys, catnip, and even (sigh) costumes. You don’t have to be a lady to play Cat Lady either; as the box points out, Ernest Hemingway was also a famous cat collector.

Cat Lady is a game for two to four players. Usually when I hear that description, I cringe a little, because the two player game ends up being a disappointing shadow of the multiplayer experience. Cat Lady gets around this problem by adjusting the game for the number of players. For a four-player game, use the whole deck; for three players, remove the cards with a 4 in the top corner plus two random cards; for a two player game, remove the 4 and 3+ cards and two random cards. This ensures that two player games don’t get boring, or frustrating; even if it does mean there are cards (and especially cats) you will never see if you can’t find that fourth friend to join in.

The game consists of two decks of cards, Game Cards and Stray Cats; a collection of colored food cubes; paper VP tokens, worth 2 points each; and a 3D wooden cat token. Shuffle the Game Cards and lay out a 3 × 3 grid of cards, face up, in the center of the table; keep the rest of the deck nearby as a draw pile. Next, shuffle the Stray Cats and layout 3 cats beside the game grid. Put away the rest of the Stray Cat cards, there will never be more than 3 Strays in a game. Keep the food cubes and point tokens nearby, you will need them later. The player who owns (or has owned) the most cats in real life plays first. The person who will play last then places the cat token next to one row or column of the game grid. The game is now ready to play.

The first player chooses which row or column of three cards to pick up, with the limitation that they cannot take cards that are next to the cat token. If the cat token is above the grid, it is blocking a column; if it is along the side if the grid, it is blocking a row. The cat token is moved to the blank spot from which the cards were taken, and three new cards are laid out. There are seven categories or cards: Cats, Food, Cat Toys, Catnip, Costumes, Spray Bottles, and Lost Cat posters. Cats are immediately placed in front of the player. Food Cards (tuna, milk, chicken or wild) are handed in to get Food Cubes of the same color (blue, white, red or purple). Food Cubes are used to feed your cats (their food preferences are written right on the card). All other cards stay in your hand. Catnip, Toys, and Costumes will be turned into points at the end of the game, but the Spray Bottle and Lost Cat are different. These cards are used during the game, but only on your turn. The Spray Bottle can be used to move the cat token to another spot. Lost Cat cards can only be played in pairs. You can trade in two Lost Cat cards for either one of the three Stray Cats or for a 2 point token. Stray Cats need to be fed just like any other cat, but they have special abilities that can give you an advantage.

Play rotates clockwise until, when refilling the grid, there are not enough cards to make a full row/column. The game ends, and the Scoring Phase starts. Scoring is rather complicated and is best done one player at a time, in stages. I recommend keeping the rulebook nearby for reference. Start off by looking at your cats. If you haven’t done so already, arrange your food cubes so that each cat gets their preferred meal. If you don’t have enough food, you will get -2 points for each cat not fed. When a cat is fully fed, you get points equal to the number in the half circle on the left side of the card. If there is a star in the circle, your cat has a special ability. Follow the directions on the card to determine how many points you get. For example, Dinah says “Dinah is worth 1 point for each white cat you feed”; so you would get a point for every white cat you have that is fully fed, including Dinah herself, who is white and orange. But you don’t want to waste food either. If you have the most unused food cubes, you get -2 points.

Next, look at your hand. Put aside any unused Spray Bottles or Lost Cats, they are not worth any points. Now here is where things get complicated. Let’s look at the Costumes first. You get 6 points if you have more costumes than anyone else; if there is a tie for the most costumes, the points are divided evenly between the tied players. If you have at least one costume, but not the most, you get no points. BUT, if you have no costumes at all, you get -2 points. Next, score your Catnip. If you have no Catnip cards at all, you get no points. If you have 2 or 3 Catnip cards, you get 1 point for each of your fed cats. If you have 4 or more Catnip, you get 2 points for each of your fed cats. BUT, if you only have 1 Catnip card, you get -2 points. When a player asked me about this I said: “I guess if you don’t have enough, the cats will fight over it”. Score your toys next. Cats get bored if they play with the same toy all the time, so you get more points if you have different kinds of toys. There are 5 kinds of toys; if you have one of each, you get 12 points. If you have a set of 4 different toys, you get 8 points; a set of 3 is 5 points; a set of 2 is worth 3 points, and a single toy is one point. You can arrange your cards into multiple sets. For example, 3 mice, 2 cat towers and a feather wand would be a set of 3 (mouse, tower, feather), a set of 2 (mouse and tower) and a single mouse — 5 + 3 + 1 = 9 points. Finally, count up any 2 point tokens you earned during the game. Add up the points and penalties from each category to get your total score. The player with the highest score wins. If there is a tie based on points, the winner is the player with the most fed cats. In the unlikely event of another tie, the rulebook suggests playing a new game as a tiebreaker.

While you are playing the game itself, it’s fun and fairly easy. As a beginning player, I did find myself talking my way through a turn. “This is your food, now the cat moves over here, and we put out three new cards”. But scoring is something else entirely and can be quite intimidating. It almost feels like the game designer is saying, “Hey, did you enjoying meeting new cats, feeding them, and playing with them? That’s great! Here’s a math quiz.” One of the members at Board Game Geek did find a solution to this, by creating and uploading an unofficial score sheet. It’s not perfect, but it does make things easier.

I very rarely want a game to be more complicated, but I really wish there was something to do with the costumes. Like maybe the cats need to wear the costumes to get points for them. Maybe you need to feed a costumed cat more, to bribe it; or maybe some cats like costumes and others don’t. Everything else had a real-life correlation to being a Cat Lady. The food keeps the cats fed, the toys and catnip keep them happy. But the costumes were just there, a thing to be counted. The game developer should have either given the costumes a purpose, or left them out altogether.

One last thing. My friend and I learned that playing this game can have an unexpected side effect. If the game is being played in the home of a cat owner, expect to attract the attention of the real kitty. In our first game, we were visited very quickly, because of the game being Something New, and because of the cat hearing the words “food” and “cat toys” repeatedly. However, after discovering that neither of these things were real, he soon settled down to watch the game, instead of walking all over the game setup.

You can find Alderac Entertainment Group at www.alderac.com or on Facebook at facebook.com/alderac.