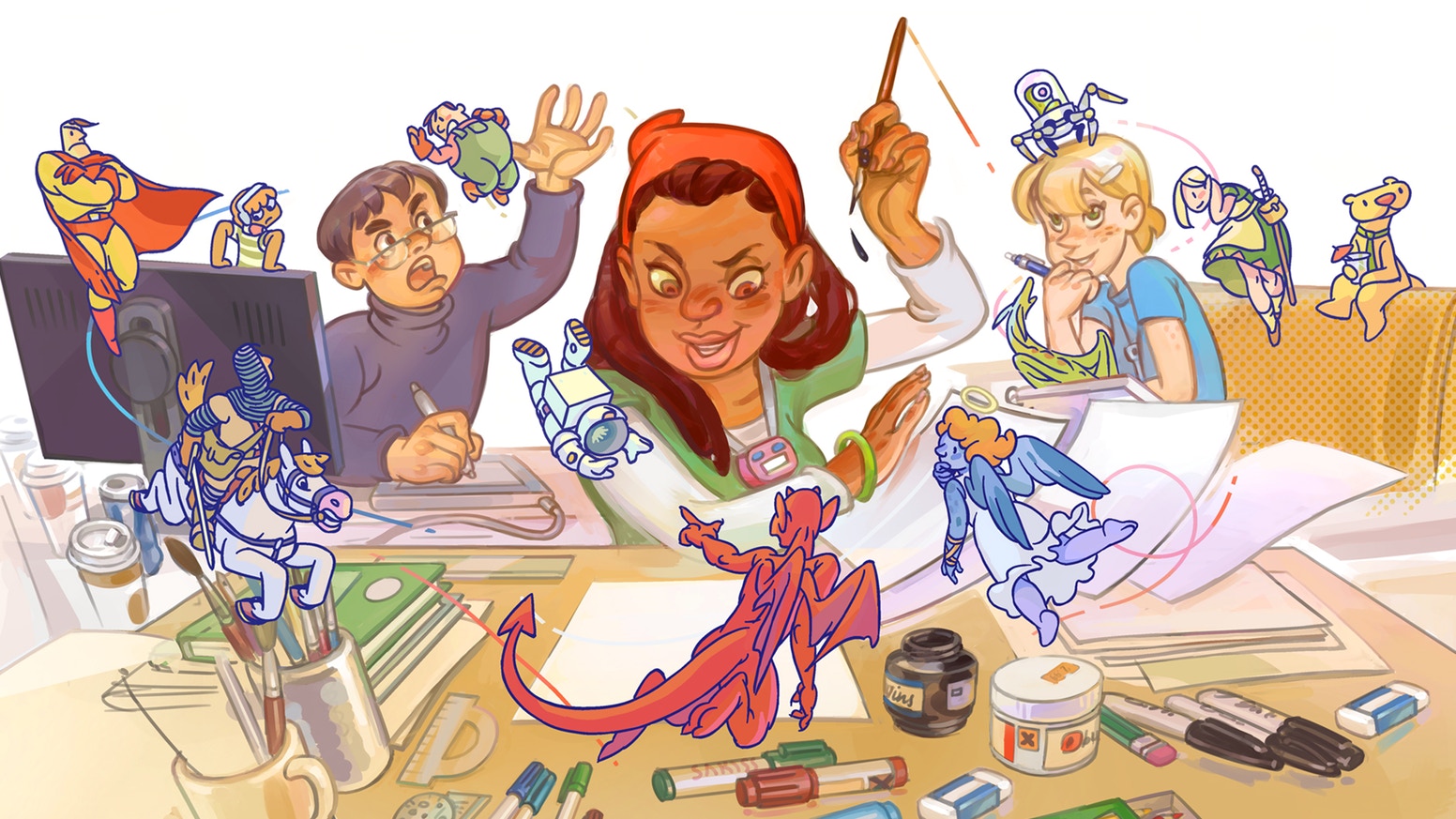 Sometime back, before the dawn of The Rat Hole, I had the pleasure of reviewing a unique drawing game called Mangaka. Cartooner is both a retooling of, and compatible with, Magaka. Mangaka, as the name implies, drew heavily on Japanese influences. Cartooner is the same game, but with a more westernized cultural view.

Over the course of four timed rounds, players will draw ever more challenging comics using three Theme Cards that stay with each player throughout the game and an increasing number of Trend Cards that changes each round. In the first round players draw two panels, then four, six, and finally eight in the final round. But as the number of trends and the number of panels increase, the time limit does not.

I want to be very clear here: I am, in no way, an artist. If the only way for me to survive a coming apocalypse was to draw my way out, I’d be zombie food in minutes. But the best part about this game is that the scoring is largely objective. If the person drawing a stick person is able to convey their Themes and the current Trends as well as the person who drew a perfect replica of the Mona Lisa, they get the same points. I’ve played against teens, teachers, writers, and even actual artists, and held my own. More importantly, everyone held their own and had a blast. It says a lot that when more than half the table went into the game feeling unsure, everyone still finished with a huge smile and wanting to play again another night.

As with any game that uses single-use components, eventually, you run out. In the case of Cartooner, you get enough printed comic sheets for 16 players worth of games. There are a number of ways around this. You can easily print out more sheets unless you are the type who wants to keep your pages I suggest double siding them before recycling them. [As I write this, the actual cartoonergame.com website directs back to mangakagame.com which is fine and you can use the pages branded for that game as well.] I have been impressed with some of the little production details (like the box insert) that have been improved between the versions of the game, so while I can’t see it, I can’t imagine the new website won’t be as equally functional as the previous one.

The game works for 1-8 players, with slightly different rules for solo mode, but with extra time and supplies (again, printable online) you could easily run more people. If I ever have the time at a convention, I’m tempted to run a large scale version on whiteboards.

There’s a decent chance Cartooner could be a hard sell for many “gamers” but is a great option if your group is willing to give it a chance. Even having enjoyed Mangaka before this, I was honestly surprised at just how much fun absolutely everyone had playing Cartooner. The westernized concepts make the game a bit more accessible, and I can’t wait to see what happens when I mix both games together.

You can find Mock Man Press online at store.mockman.com or on Facebook at facebook.com/mockmanpress

You can also check out mangakagame.com and cartoonergame.com for more great info on both games.