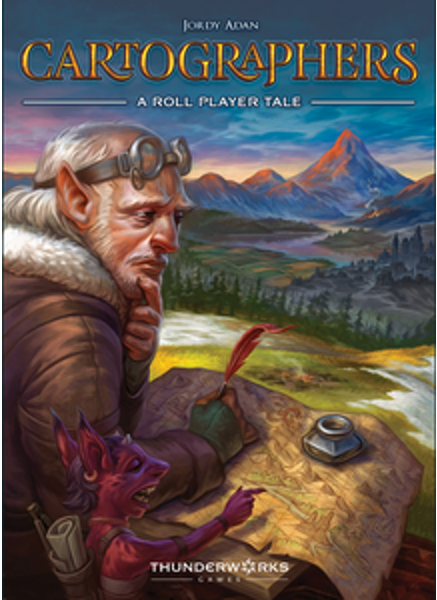 Set in the world of Roll Player, players compete to earn the most reputation by the end of four season. You do this by creating the best map using simple rules/shapes determined by the flip of a card each turn.

Essentially a roll & write (or in this case, a flip & write), the game is played over a series of seasons, broken down by several cards, showing different terrain types & shapes. Here’s the gist of it:

Keep in mind, I don’t mind the occasional filler game. I prefer a longer, heavier Euro game but small games are fine. When it comes to Roll & Writes (or Flip & Writes), there are so many these days that it’s hard to stand out from the crowd. Well, Cartographers does just that. In a sea of mediocracy, this game does something that most don’t do; throw a bit of strategy into the mix. Sure, there’s some luck, depending on what cards come up but everyone is using those same cards. What matters is where you put things. You’re a cartographer, for god’s sake. Make sure your map is the best it can be.

But is it fun?

It’s a flip & write. You know what you’re getting into & should know if this is something that will be fun for you. As I mentioned earlier, this is a step above the rest so if you like the standard roll & write system but want something a bit meatier, this will fill that slot.

The age range is listed at 10+. It could probably even be a bit lower than that. I think it’s fairly simple to grasp & you don’t have to know how to draw (although, you can make your map a pretty & fancy as you’d like. Even use colored pencils, if that’s your thing).

As far as weight on BGG, it’s listed at 1.91. That’s comparable to Ticket to Ride, Battle Line & Stratego. I’d have to say it’s a bit easier to grok than any of those but close.

In conclusion, I enjoy this game. Again, not something I’m gonna run for but if I’ve got a group of people that want to play a roll & write (or something similar), and want a bit of thinking to go with it, this is the one I’m gonna grab. There are some that are a bit more complex/deep (such as Ganz Schon Clever or Fleet: The Dice Game) & plenty that are simpler (such as Twenty-One or On Tour) but Cartographers fits nicely in a spot, right in the middle.

Tony Lawhorne discovered the hobby in 2014 & quickly became addicted to it. He play all sorts of board games, from party games to brain-burners but his heart belongs to the mid-to-heavy Euro game. He plays as often as possible & loves trying new games, much to the chagrin of his family & friends. As far as his real life, he’s married with 3 adult children & run a marketing company, Lawhorne Design LLC.