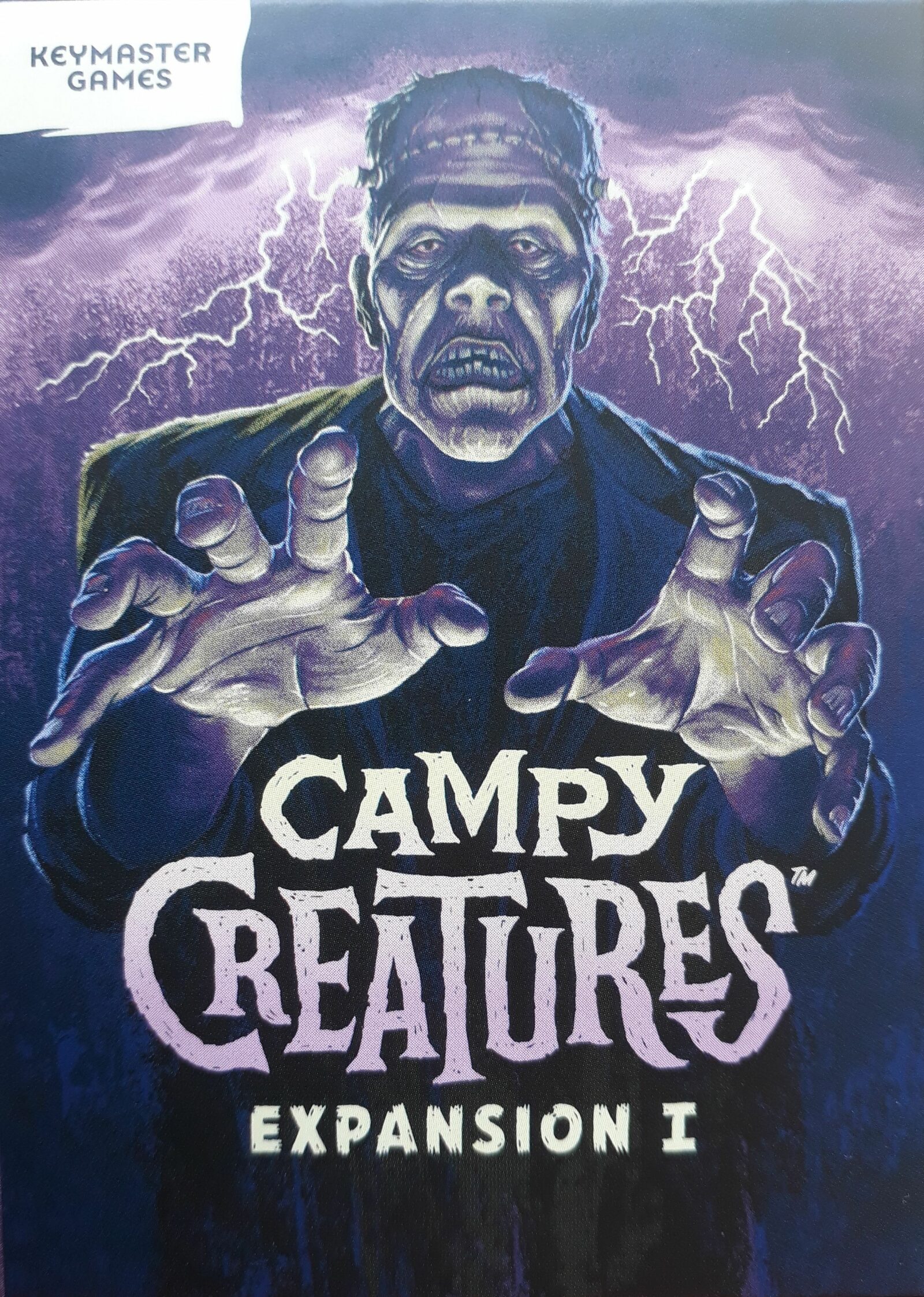 I’m going to start this review with the same statement I opened with a year ago, in my review of the Core Game. Campy Creatures, from Keymaster Games, is one of the most gorgeously illustrated card games I’ve played in a VERY long time.

My previous review was based on the first edition of the game, just as Keymaster Games was Kickstarting the second edition and first expansion. To properly look at the effect that the expansion has on the game, first I have to look at some of the changes made to that second edition. Especially since the most important of those changes require an upgrade kit to properly integrate the expansion if you only have the first edition.

The most noticeable, but least significant, change is the much-requested larger Clash-O-Meter. Since the change is largely cosmetic, the new board was not included in the less expensive Kickstarter upgrade kit, but is included in the retail Conversion Edition. With the new board being around double the size, it means there is more space around the score track. As well, the extra space on the board also provides a distinct space for the second change. Locations.

Locations add an extra random element to each round of each game. Every location comes straight from scripts of the silver screen shlock that inspires the entire game. From The Secret Lab to The Metropolis from a random Kaiju movie, when the round ends, the player with the most Mortals with a location icon on them conquers that Location to give them exclusive access to its ability in future rounds. In the third round, there is another set of Locations labeled as The Final Act. When conquered, these Locations can change how that final round is scored either for a single player or all of them.

The last big change is to the mortals. The mortals have been broken down into sets. There is a set of “Basic” Mortals, that all have a specific positive point value, whereas the negative and variable point Mortals are separated to different sets to allow players to customize the Mortals deck as more expansions come out. The second edition also adds a new set of mortals, The Assistant. Each round a number of Assistants are shuffled into the Mortals deck. When the round ends, captured Assistants are scored, and remain captured, while new assistants are shuffled into the deck to replace them in the following round.

As much as myself and all my players loved the first edition, the additions add so much more to the game. We didn’t find it suffered for a lack of replayability before, and the changes still managed to improve on it

Expansion 1 builds on those second edition changes by adding in new Locations, a new set of Mortals, and four new Creatures:

For Location cards, The Power Plant allows the player that conquered it to discard it and “power up” the next Creature they play by +3. What that means is a Kaiju (normally an 8) could be powered up to an 11. The Dark Castle can be used to bring a random Creature card from out of the game to that player’s hand for use. Lastly, The Final Act Location is The Motel, which gives all players 1 point per location icon on their captured Mortals.

Of course, a game of Campy Creatures just wouldn’t happen without the Creatures. The new Creatures build on the alternate Creature rules used by the Demogorgon from the core game. The players will collectively choose to play with either an identical set of Creatures, or to each select their own set. Either way, Creatures are swapped one-for-one according to its number. The Monster (6) would replace the Vampire (also 6), The Man-Eating Plant (4) would replace the Invader (also 4), and so on.

As a musical theatre guy, The Man-Eating Plant (4) is thematically one of my favourite Creatures. When played, its card is placed next to a Mortal in play. That Mortal becomes “entangled” and can only be affected or captured by Creatures of 7+ power or a Man-Eating Plant. If the player chooses a different Mortal to capture, the original Mortal is no longer considered “entangled”.

The Rogue Robot (5) must discard an uncaptured Mortal in play before capturing one itself. That may mean discarding the only Mortal they could have captured, leaving them with nothing.

The Monster (6) is, of course, Frankenstein’s Monster. When played that player will take a +2 Power Up Token, and give it to the next Creature they play. Since there is no limit on Power Ups, The Monster’s ability can be strategically combined with The Power Plant Location ability to give a total of a +5 Power Up to a Creature.

As it turns out, I had the same problem playing Campy Creatures this time as I did last year. It’s too much fun and nobody wanted to play anything else. That’s ultimately a good problem to have, and thanks to the second edition changes, Expansion #1 has shown that Campy Creatures not only stands up on its own but also has the potential to be infinitely expandable.