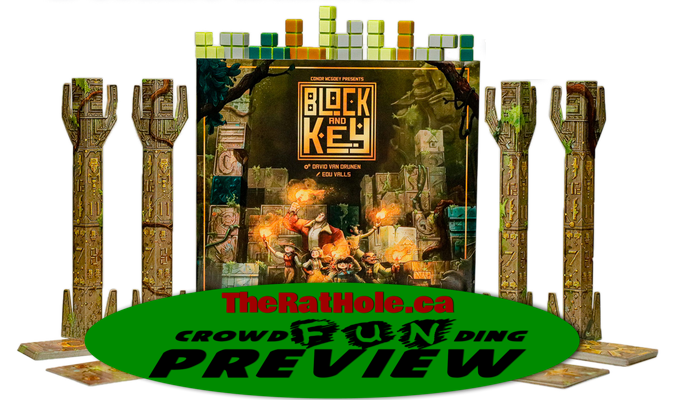 [Editor’s note: The following preview is based on a complete, but not finalized, product; produced in advance of a crowdfunding campaign. -dc]

Imagine playing Tetris, where the block drop in 3D, but you only score from the 2D-side view. That’s getting close to what Block and Key is.

The game is themed around a lost jungle temple found in the fictional area of Western Ameranada, during the archeological boom of the 1950s. The theme is obviously intended to be evocative, rather than accurate, and it does this brilliantly. For lack of a better term, everything feels very fictionally authentic. Like you could find this in a story about Indiana Jones, or Lara Croft, or maybe even the grown-up Dora the Explorer. From that viewpoint, the thematic elements are executed brilliantly. But the theme really does only goes skin deep. Sometimes that comes out feeling cheap and uninspired, but that’s not the case here. The actual game could feel equally at home in the Oasis of Ready Player One or set against the “Russian” backdrop of Tetris, but the gameplay itself would still be what shines.

There are two boards, stacked vertically over top of each other. The bottom board is the Excavation Site, where players can draft a row or column of three random blocks. These Tetris-esque blocks get played on the top board, the Temple Floor. The multi-levelled play space isn’t just a trendy gimmick, there is a functional reason for it that I’ll come back to.

On their turn, each player may Excavate Blocks from the bottom board or Position a Block on the top board. Positioning rules are fairly simple, you must place any piece with at least one corner in contact with the corner of another piece. If the piece is placed with one of the sides against the side of another block, or stack of blocks, the new piece must be higher than the stack it is adjacent to, and can only stack up to 6 cubes tall. Pieces may be played on top of each other (again up to 6 cubes tall) and may create a bridge (with space in the middle) but not in a way that leaves a cube hanging over the end of another stack like a ledge.

After taking either actions, the player checks to see if any of their Key cards have been fulfiled during their turn. This is the how the games scores, and where it becomes unique compared to similar puzzle games. Players are trying to complete the patterns shown on their hand of cards. While blocks are positioned three-dimensionally on a top-viewed grid, they are only scored from the unique two-dimensional side view of the individual player. This is where the elegant functionality of the raised play space comes in. The top board sits just below eye-level for most people, allowing them to see the grid and 3D shapes better, but also to simply adjust themself to see their side view easily.

Timing and local health restrictions being what they are, I was disappointingly only able to play Block and Key’s solo mode. Solo play is even more straightforward than multiplay mode. You have 11 turns to fulfill as many Key cards as possible, with a limited AI system to add a small bit of the potential chaos sown by other players. In both modes, the score is based on the completed cards, plus bonus points provided by a unique Enigma Card for any blocks facing the player that matches the colour on the Enigma Card.

The game isn’t perfect, but the advance copy I received is also not the finalized product. After a highly successful Kickstarter campaign, additional changes are being integrated from stretch goals, before the scheduled release in the fall. One issue I found, is that the very unified visual design has resulted in the victory points on the cards being overly subtle, and the rulebook doesn’t explicitly point them out. The only other problem I noticed was that the grid doesn’t quite match the size of the blocks. Except by the time that becomes at all noticeable, it has also become largely irrelevant. You aren’t actually intended to position blocks according to the grid; you position them relative to the other blocks in play, using the grid lines as a guide to keep the blocks squared up properly (something that IS very important.) I have no doubt that the finalized rulebook will have notes about things like this because they aren’t the sort of problems that need anything more than that sort of note.

Even with those (ridiculously tiny) “issues” I absolutely LOVED this game. The solo rules are streamlined, and the multiplayer rules look like it will be an even more exciting time. This is the sort of game that you only want to play in public, if you want a constant stream of people stopping to check it out; that’s the sort of magnetic table presence it has. I hope that’ll I’ll have the opportunity to play this with my friends again, when it comes out in the fall.

As I mentioned, the Kickstarter campaign was very successful, and even though the campaign ended before I was able to get this preview out to you, they are allowing for “late pledges” at the discounter campaign rate, for as long as they will be able to do so. There is no plan for a full retail release at this time, but more and more retailers are bringing in crowdfunded games so there will be copies on the market. Honestly, go preorder this one, because it’s sure to be hard to find even in the secondary market. It will be THE game to put under the tree this Christmas. (Don’t do Christmas? Even better, because you’ll be playing it before your friends waiting to unwrap it.)

You can read our CrowdFUNding Spotlight on the Block and Key campaign HERE, and find Inside Up Games online at insideupgames.com or on Facebook at facebook.com/insideupgames.