Blinks is a fascinating new game system from Move 38 that blends the hands-on play of tabletop games, with high tech innovation and real-time, video-game-like, responsiveness.

Each Blink is a standalone hexagonal mini-computer and game-cartridge, that stores one specific game, and is capable of temporarily transferring that game’s programming to any other Blinks magnetically connected to it. When you’re finished playing a specific game, just activate a different Blink to play the game stored on that one instead.

Some of the games only require a single 6-Blink set, while other games require two sets. The first release of the commercial set will contain at least six games and the potential of another six games in the 12-packs. Future games will be made available on single Blinks, and there’s a comment about a possible “Blink Bank” that for now looks to be planned for developers only.

That brings up the next really fun thing about this system. Blinks are open source. The API Documentation is available for anyone who wants it, and if you have your own ISP programmer all you need is the base set. If you don’t have your own programmer, you can back one of the developer levels of the campaign and get one. If you have zero clue what anything in this paragraph means, you’re not alone. I haven’t been much into coding since I was fairly young, but I understand enough to geek out for other people. 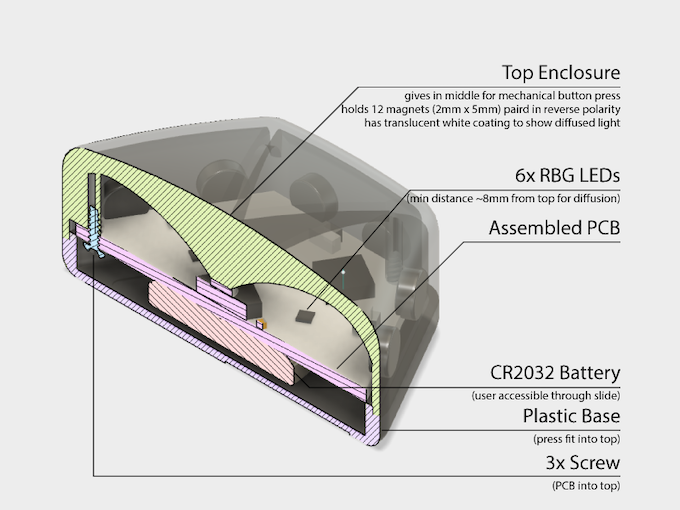 Backer levels start at $59 (USD) for a 6-Blink set or $119 for a “Social Pack” of 12. Yes, that’s a dollar more than two single sets, but was apparently just because of rounding to 9, it’s still below the estimated retail price. The delivery estimate is March 2019, but if you are interested in developing your own games, you don’t need to wait. For $129 you can get an advance six-Blink set, with all the tools you need to design and program your own games, or $199 getting you an advance 12-Blink set, along with a single set of dev tools. The Developer sets will have the same internal components as the retail versions, but won’t have the fancy injection molded outer shell, just a 3D printed shell. They will still function the same as the retail version but should be shipped in June 2018, almost a year ahead of the fancier version.

Everything I’ve seen and read about this game looks great. If you are just a game player, you’ll be getting a good variety of games for your money, with future games being offered at a planned low price. If you or someone you know is into coding, this is an exceptional opportunity to do something cool.

You can find Move 38 online at move38.com or on Facebook at facebook.com/move38

If you are already pretty sure you want to try your hand at developing your own Blinks game, there’s a growing community of like-minded people at facebook.com/groups/weloveblinks

BONUS VIDEO: Hear a bit more about how Blinks came to be: