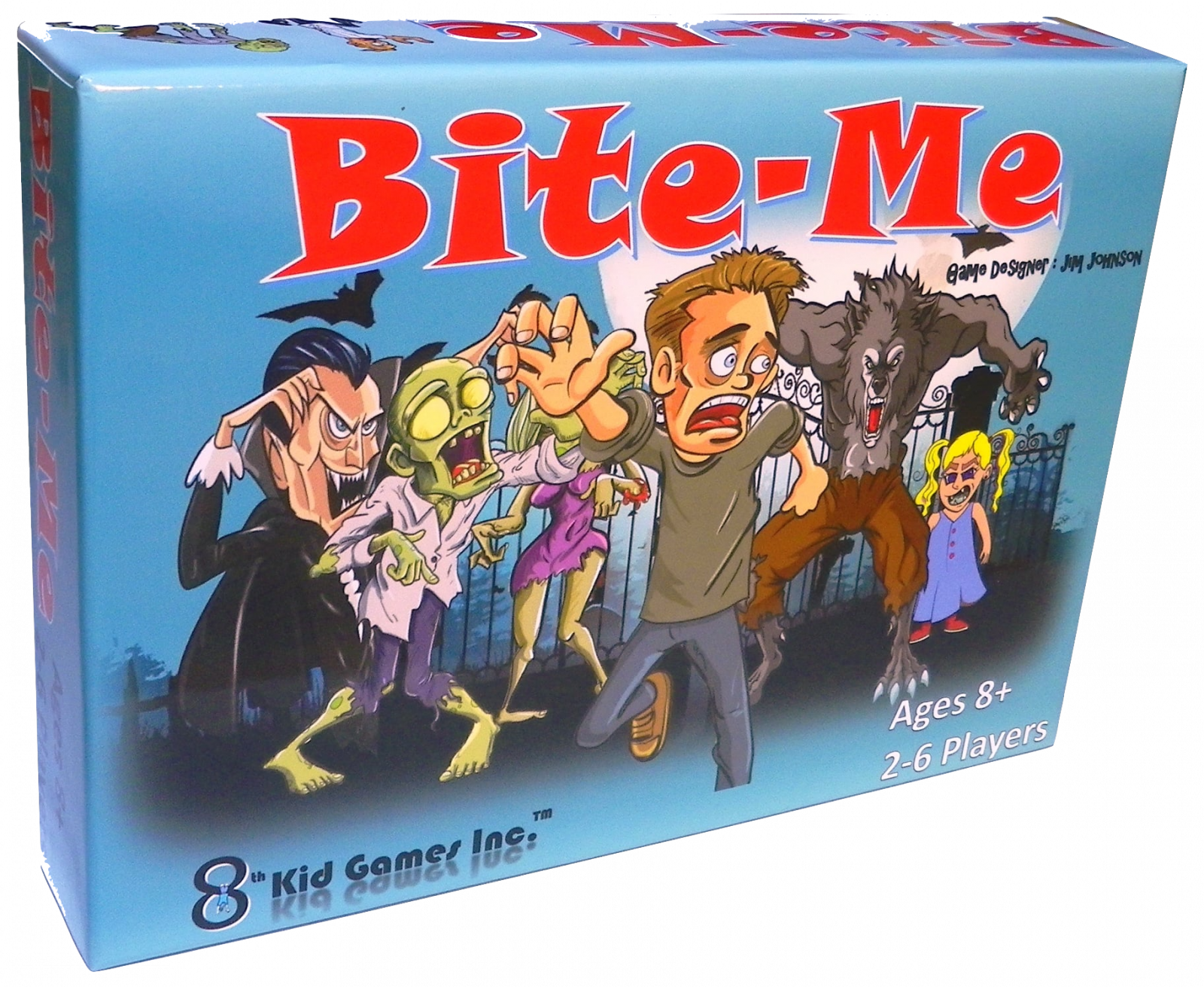 As the Spooky Season continues in The Rat Hole, today we have a game that is, to me at least, a near-perfect Halloween game. You see I don’t like gory Halloween, and I’m lukewarm on scary Halloween at best. I love spooky Halloween, or better yet spoopy Halloween. I like silly Halloween that pokes fun at scary and gore. The nostalgic Halloween of the 1980s when kids wore plastic masks you couldn’t see out of and a costume that was little more than a printed garbage bag over a snowsuit. Bite Me takes the eternal struggle between Humans, Vampires, Werewolves, and Zombies to that same delightfully goofy level and I’m (as the kids say) here for it.

To start each player chooses a character score sheet. There is no functional difference between the 12 options (expansion?) only different art and a brief one-line description. Everyone draws their hand of cards and the fun begins. On a player’s turn, they can either play up to two cards or discard two cards.

The goal of the game is to infect all of your opponents (turning them into a Vampire, Werewolf, or Zombie), kill them. Each player has four lives and must kill one of each type of Infected while reverting to being human yourself (since you will likely have been infected by your opponents) or be the last player standing.

8th Kid Games didn’t try to reinvent the wheel with gameplay here, and that’s a good thing. Card types are easily identifiable by colour, Attack cards show exactly what colour cards may be used to defend against it, and all cards spell out exactly how and when that card may be used. The one neat thing they’ve done is having two separate types of battles, a Standard Battle and an Alpha Battle. In a Standard Battle, the active player plays a red attack card, and the second player must defend with either a green protection card or another red attack card of a higher number. If they respond with a red card, the active player may respond with a still higher red card, and so on until a player can’t or won’t respond. The winner covers over the appropriate infected species on their scorecard and the loser covers one of the lives on theirs. An Alpha Battle is triggered each time a player is infected with a similar species already in play. The battle runs similarly, but the winner also steals a card from the loser and their hand size is increased by one, with the loser’s hand size being reduced by one. (hand sizes return to normal if a player changes species.)

One of the other fun things about the game is that when a player becomes infected they get to choose a “My name is…” card of that species. I was lucky enough to play a game with M at Origins, who explained that many of these cards were loosely inspired by friends and family members (including one of herself). Even without that behind-the-scenes info, the “My name is…” cards are pun-fully cheeky with Likes and Dislikes. For example, Erik (a werewolf) Likes hypoallergenic shampoos and Dislikes Half-Off Neuter Wednesdays, Rich (a vampire) Likes hemophiliacs & neck-tarines and Dislikes the stake & garlic shrimp combo. Tidbits like this are what take a fairly simple game from good to great. They are those kids-movie moments that go right over a child’s head but can make their parents crack up.

Moments like that aside, this is a great family weight game, that plays just fine with a table of adults. The cards are larger than normal (I honestly don’t know if there is a sleeve size that would accommodate them if that’s your thing) and also slighter higher quality than normal, which makes it a bit easier (read: safer) to play with younger players. The art is fun. The game has a good balance of aggression and automatic interaction, making it less likely a player will feel like they are being picked on or targeted, even if they are.

All told, Bite Me accomplishes everything it sets out to do and is a genuine delight to play. I’ve already been informed that I need to bring it back to the table for Halloween and I’m not going to disagree with that.

You can find 8th Kid Games online at 8thkidgames.com or on Facebook at facebook.com/8thkidgames.