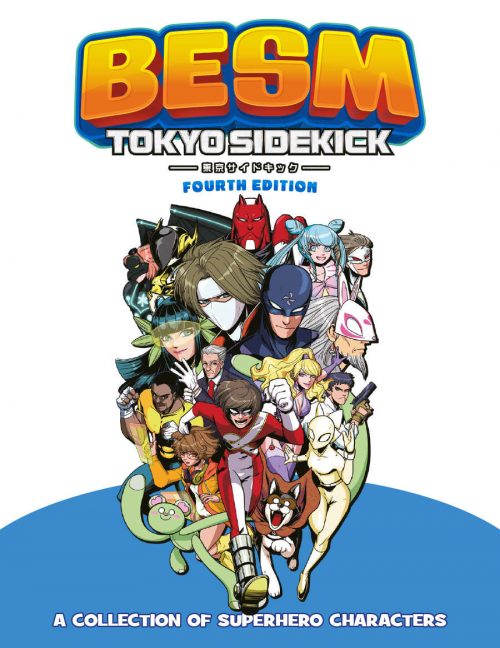 Over the summer we did a CrowdFUNding PREVIEW on the massive board game, Tokyo Sidekick. One of the rewards for that game’s Kickstarter campaign was the BESM supplement we are talking about today.

One of the coolest things about Tokyo Sidekick is the sheer volume of worldbuilding and character development that has gone into it. Here in the west, we only get to see a fraction of what is available from the original Japanese publisher, Little Future. But even that fraction is impressive. The game already almost feels like a roleplaying game, but since there isn’t one, releasing those characters for BESM simply makes perfect sense.

This is a short, 24-page, supplement that I honestly didn’t even realize would be coming to retail at the time it was announced. All of the original heroes, and their respective sidekicks, are included and paired together as a two-page layout. The booklet is organized in Alphabetical order, by Hero name, with their Sidekick on the opposite page. The only exception is the pairing of Cool Guy and Jinx Cat, who are not actually associated with each other but are both reformed villains making them a reasonable pairing.

Each individual character is laid out with their story-related details, a brief biography, and a standard BESM Stat Block, with the character art disappointingly, but understandably, just lifted from the original board game art. I love the artwork, just for the record, but that’s why I wish there was more of it.

It’s very hard to criticize a product created as an extra thing in a crowdfunding campaign, especially a campaign that will likely have follow-up campaigns to translate and release more products in the line. Maybe there are future plans we don’t know about, maybe there were stretch goals that never came to light, maybe there is just a load of coulda-woulda-shoulda pipe dreams. Who knows. The prototype that I previewed for the board game has long since been passed along to other reviewers, so I can’t even compare how much of each character’s background is or isn’t included. I do feel like this booklet could have been much longer. Each character could easily have been expanded to a two-page layout, like the characters in the Dramatis Personae book. Being much shorter, it’s a little easier to overlook that this release suffers from the same missing detail as Dramatis Personae did, lacking a Table of Contents, etc.

The potentially good news is that, in Japan, Little Future does have several more expansions with even more characters. So there is potential for more crossovers with these amazing games. Even just with the content we already have in English: there are 20 more Menaces that could easily get the full BESM treatment for a booklet like this one, there is a new Sidekick and another two Menaces included in the Akihabara Web scenario expansion, there was a new Hero and Sidekick unlocked as stretch goals during the campaign, and another pairing almost unlocked. Expand all the entries to a two-page layout, and suddenly you have the material for a full-sized hardcover sourcebook. That’s before ever getting into those future expansions.

It’s a massive game, but I loved Tokyo Sidekick, I love BESM, and I love having the two games work together like this. I hope that someday my dreams will come true and it happens again.

You can find Tokyo Sidekick’s original publisher, Little Future, online at littlefuture.jp or on Facebook at  facebook.com/littlefuture.ltd. (However, both are in Japanese.)

American customers can also pick up both Tokyo Sidekick and BESM products through Japanime Games at japanimegames.com and facebook.com/JapanimeGames.