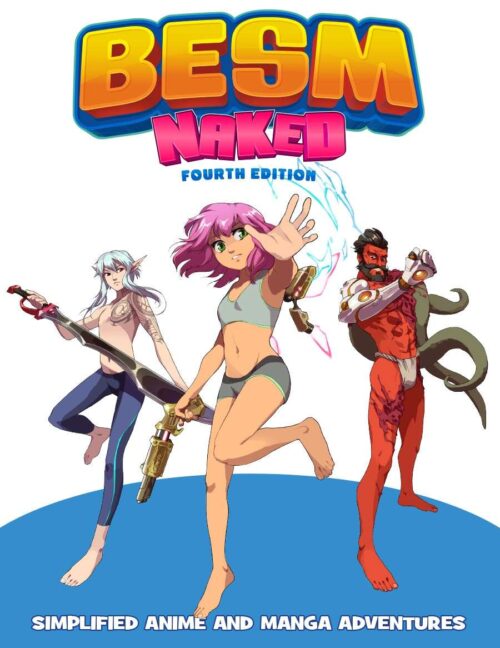 If I wanted to be cheeky, I’d strip down my BESM 4th Edition review, taking out most of the fluff until it was less than half the length. That would be the review for BESM Naked because that’s exactly what BESM Naked is; a stripped-down version of the BESM 4th Edition Core Rulebook that we looked at a few weeks ago. Yes, “stripped down” is a “Naked” joke. Yes, it’s funny. Yes, I’m still 12 years old but it’s their joke, not mine. I’m not actually going to be cheeky, but since we did just look at the Core Rulebook, for this review I’m going to try to focus on some of the differences between the books and which option may be best for you.

First thing, let’s be very clear what this is and what this isn’t. This is a standalone core rulebook for BESM 4th Edition. It is not a sourcebook, and it does not contain anything that isn’t also in the full-length Core Rulebook. It’s simply been edited down to just about half the length and should cost just a bit more than half the price.

The Naked edition of the rules is very much a player-oriented rulebook. The most significant cuts came from the final chapters of the Core book that are mostly intended for the GM. The game setting is almost entirely removed, and the Game Mastering section is just a few pages long. From an editorial standpoint, that all makes perfect sense. The setting is functionally unimportant as a beginner, and most GMs are likely to invest in additional resources anyway.

One of the more interesting (if that’s the right word) edits was in the Attributes chapter. There are the exact same number of attributes in both versions of the rules, and they all function exactly the same. The Naked versions just have shorter descriptions. What’s there is perfectly usable, and if you didn’t know better… well, you just wouldn’t know better. Having gone through both books, however, the Naked descriptions are grammatically less clear than the full entries. They are not unclear, the longer entries are just able to give more detail in them.

The different character Template options have some of that same rewording, but the biggest difference is that the Core book has 25 templates for both Race and Class, while there are only 10 apiece in Naked. That still gives a good variety to play around with, and again, many players won’t notice the difference at all. There was one entry I found a bit of an odd choice to keep. The Pet Monster Trainer option. I mentioned in the Core review that I wanted more clarity from this Class, and in the rules for Companions that are so integral to it. The Companion Attribute is still in the book, at half the length, but the entire section on Neomorph Companions was completely removed. This Class should have been the first template on the chopping block once that decision was made. I get it, the art is extra cute and the concept is massively popular in North America. But the same reasons that justify keeping it in Naked are the same reasons I was already somewhat critical of how it was presented in the full version and keeping it around in this form feels like doing it a disservice. I could make a similar argument for the Mecha Pilot Class, and Mechas in general, but there wasn’t nearly as much information covering that topic to begin with.

The BESM Multiverse sourcebook will cover all the removed setting information, and then some. If I had my druthers I’d love to see a “Naked” branded sourcebook for the missing Templates, Companions, as well as reintroducing the Pet Monster Trainer and Mecha Pilot Classes, with the removed info for both of them added back in. It’s also possible those Classes will be greatly expanded on in the BESM Extras sourcebook that’s Kickstarting in the fall. That book is specifically meant to expand on the less general rules in BESM, so it would make sense. I’m kinda hoping to see daikaiju and kyodai hīro genre rules in that one, but “Giant Monsters & Giant Heroes” could easily be a huge book unto itself… a Giant book even. (I’m not sorry for that joke.)

So, to wrap things up:

-If you are already familiar with Big Eyes, Small Mouth I would recommend the full Core Rulebook.

-If you are brand new and have someone else that wants to GM the games, you can easily get by with the Naked edition.

-If you are new to BESM and are going to be GMing the games for your group, Naked is a perfectly good place to start, but you’ll probably want the full version eventually.

-If you are GMing the games for your group and want to be able to make life easier for players who might not have a copy of either edition, having both is a great idea. Plus you can always send out digital copies of the free BESM Primer and Character Sheet ahead as well.

I don’t love GMing, but I probably fall closest into that last category. If you’ve ever seen photos of me working on a non-core RPG review, I’ve usually got a stack of other books laying around. I will always prefer more information to less, so having both of these editions on my shelf will make my heart happy when the next book(s) come out. Whether you choose to buy the full-length BESM 4th Edition or the BESM Naked edition, you’re sure to enjoy the book and the whole game.

American customers can also pick up Dyskami products through Japanime Games at japanimegames.com and facebook.com/JapanimeGames.