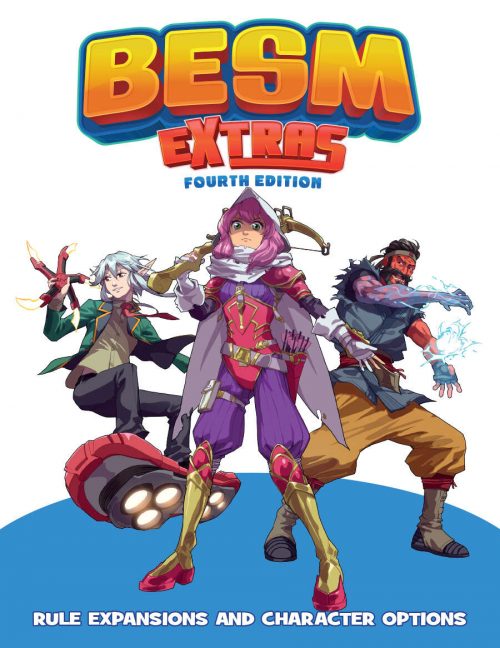 If you happened to read my last few BESM reviews on the Dramatis Personae and Tokyo Sidekick sourcebooks, you may recall I was somewhat critical of them. Not for what was there, but for the things that WEREN’T there. The content that was there was great, but they can do better. When I said they can do better, THIS is what I’m talking about!!!!! (Do I need more exclamation points there? Because I’ll do it if it wasn’t clear enough for you. Here, just in case you need them have some: ! ! ! ! ! ! ! ! ! ! ) I open BESM Extras and I know exactly what I’m getting into, why it exists, how everything is laid out for us, and where to find what.

I guess I’m supposed to tell you what all that is hey? Like, that’s why you’re here? Well if you insist.

BESM Extras is exactly what it sounds like: extra rules that can expand the experience of your games if you want to use them. The original Big Eyes, Small Mouths came out 24 years ago and the Tri-Stat system that powers it has grown and changed and grown some more. So as BESM Fourth Edition was being designed, choices needed to be made. The game provides so many great story opportunities, that having all of those more detailed and precise rules is important. The flip side is that even hardcore gamers don’t want a near 700-page core rulebook. Many gamers don’t even want a 350-page rulebook, so the stripped down (144 page) BESM Naked rulebook was released alongside the Core Rulebook. BESM Extras goes the other direction and adds back those details that not every group will want.

If you’re playing a light game with fairies, you probably won’t need to worry about your character’s Sanity, but in a horror-based game it’s almost required. If you have a player that likes to be a long-range sniper or a carefully calculating melee specialist, there are new rules that will make those characters truly shine. But they aren’t always important to every player just like mass combat between armies probably won’t come into most games.

Maybe your players want more control over customizing their characters than the normal Skill Groups provide during creation, so Extras lets you de-streamline the process and move beyond skill groups. The flip side to that is Power Packs and Bundles that pre-group certain Skills and Attributes to simplify building and recording those character details.

The book talks about dealing with power levels well above the normal limit of 12, and dealing with stats that are specifically 0. There are sections on customizing vehicle and firearms details from a modern real-world standpoint and from a completely off-the-wall sci-fi standpoint.

BESM is a game that is all about the story, and how the table works together to tell that story. BESM Extras is entirely about the minutiae of telling that story. There is no fluff here, just details and statistics. Everything here is all about how the dice roll, except the last chapter. The last chapter briefly covers playing BESM entirely without dice. There is a note on how the inspiration for the original BESM came (in part) from Amber Diceless, along with a reminder that this final chapter is only a fast look at how to play without dice. It mentions that actually running Diceless BESM could take an entire book to properly cover, so who knows if that book is coming someday. Next up for TheRatHole.ca will be BESM Adventures, while we “patiently” wait to see what the Absolute Power (aka Silver Age Sentinals Second Edition) Kickstarter will look like later this year, so I won’t be holding my breath on a Diceless sourcebook for some time.

American customers can also pick up both Tokyo Sidekick and BESM products through Japanime Games at japanimegames.com and facebook.com/JapanimeGames.