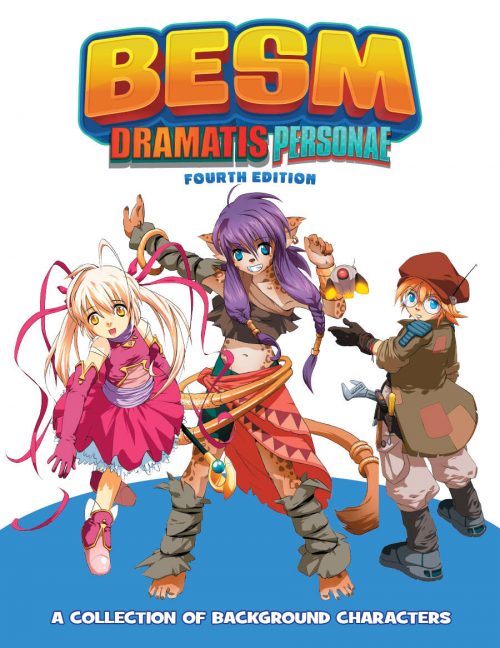 How do you judge an RPG supplement? Exclusively by what’s in it, or also what ISN’T in it. This is what I’ve been struggling with since digging into the new Dramatis Personae sourcebook for BESM 4th Edition. So I’m going to give you both sides of that discussion, and just let you decide.

A bit of background, When the Dyskami Publishing Company launched BESM 4th Edition, they recognized the need to get as much supplementary information to their player base, and quickly and affordably as possible. To that end, they released a number of official PDF products on DriveThruRPG, including five small sets of fully fleshed out background characters.

This hardcover edition of Dramatis Personae (and the digital edition labelled as the “Master Collection”) brings together those smaller sets into a single collected volume, including a dozen new entries also released as a fifth standalone PDF.

Each character has a beautifully laid out two-page spread. The top of each entry has the Character (build) Points and the Class or Race template (whichever is more relevant). The first page of the layout has the character’s picture, name, and story-related stats: Race, Occupation, Home World, Habitat, Height, and Mass (with mass being listed in metric for most of the multiverse and imperial for Americans). Then it has the character’s mechanical stat block. The second page has sections discussing the Character Background and Personality, a more conceptual look at their Attributes and Defect, and a selection of great Adventure Hooks for bringing the character into a story. The entry closes out with a cheeky flavour quote. How cheeky, you ask? Well, the Shapeshifter quote is “I can handle it. I’m flexible.” Terrible. Gloriously, gloriously, terrible.

Every entry in this book is chalked full of perfection. I mean that, wholeheartedly. Everything that is included in the book is great. What personally gives me pause is what isn’t included, which makes it feel incomplete. You open the cover to your standard page of credits and legalese. Next, you turn the page and you’re right into the first character. There’s no table of contents, at all. Flip to the end of the book, and there is also no index. If you don’t already know exactly what you are looking for, and what label it is sorted under, it’s virtually impossible to find something specific.

For example, let’s look at Heaven Witch Junko (June Fukura). That is exactly how her name appears, Heaven Witch Junko is the pseudonym for June Fukura, so both are listed. Nothing wrong there. She has 90 Character Points, her Race is Human, and her Occupation is listed as both Magical Girl and Student. All perfectly fine. She’s not actually a Witch, so don’t look there. Human doesn’t help, there dozens of Human entires. Look under Student, and there’s an entry for a different character (and several more Students throughout the book). Try Magical Girl… there she is! A shorter example for comparison, the Kobold Priest, Rakkis Venge, is sorted under Kobold (his race) not Priest (his occupation).

I don’t object to this order for sorting the entries, just for the record. But it makes things harder than they needed to be. Just a table of contents would have quickly answered many of the normal questions. Ideally, I would have like to also see indexes, sorting the contents separately by Character Point total, Home World, specifically by Race (here’s all the humans), specifically by occupation (giving Heaven Witch Junko an entry under both Student and Magical Girl). Add in a brief foreword explaining what exactly you are holding, and this book could have gone from good to amazing. I need to acknowledge that physical printing is rarely as easy as just add a couple more pages. But honestly, I probably would have been happier with those little details, than the handful of new entries.

At the end of the day, is Dramatis Personae worth picking up? I think yes. I feel that for most GMs, there is so much gold in here that being a little less user friendly than it could be is far from a deal breaker. I would LOVE to see a Volume 2 down the road, hopefully with some changes. Similarly, I’d love to see the next printing of this volume add those tweaks as well.

American customers can also pick up Dyskami products through Japanime Games at japanimegames.com and facebook.com/JapanimeGames.