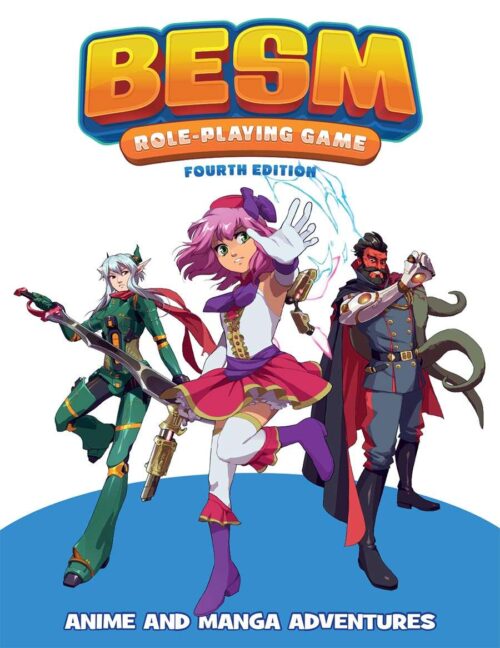 BESM stands for Big Eyes, Small Mouth, named after the art style common in anime and manga. The first edition of the game came out in the mid-90s, the project eventually landing in the lap of White Wolf, who recently licenced it back to Dyskami Publishing for this beautifully put together 4th Edition. We’ve reviewed Dyskami’s Sailor Moon Crystal games in the past, and several contributors to earlier BESM editions are back for this new edition. In short, there’s some great experience behind this game.

Interestingly, there are two parallel editions of BESM. The full 4th Edition rulebook we are looking at here, and a streamlined and stripped down version entitled BESM Naked. (Stripped down. Naked. Get it?) We’ll be looking at Naked in a few weeks, but for now, we’ll focus on the full version.

Just about every roleplaying game starts with an introduction to roleplaying in general, as well as their game specifically. Dyskami went one step further with BESM. They didn’t just assume that they would attract anime fans who haven’t played an RPG, but also that there may be RPG enthusiasts who don’t know anime or manga. They talk about the history of anime, specifically in North America; as well as the history of BESM.

It’s important to remember that anime is not a genre in itself, but rather a collection of distinct art styles from, and inspired by, Japanese culture. As such, BESM is a sort of a “universal” game system that is fine-tuned to play off of the tropes that feature across the broad range of genres that anime covers. To do that, the framework of the player character creation is greatly sped up by applying a combination of templates to bring that player’s vision to life. While it isn’t required to use the templates, it makes things much easier for newer players.

Chapter 3 covers the templates for size, class, and “race”. Chapter 4 is mostly its own chapter to make it easier to find, it’s only three pages long and covers how the three main stats – Mind, Body, and Soul – work in conjunction with each other and the different abilities. Chapter 5 details the attributes of characters and objects. Chapter 6 deals with customizing things beyond existing templates, and Chapter 7 focuses on Defects which is a major component to customization.

Starting in Chapter 8, the book shifts more into the functional rules. For example, once a player has their character built there are a number of important things that are derived from the choices made during the creation process. Cleverly called Derived Values, these are things like a character’s Combat Value: (Body Stat + Mind Stat + Soul Stat) ÷ 3. Chapter 9 covers all the different actions a player might take, as well as when and what dice rolls should be made. This chapter includes the combat rules, which are not functionally different than any other action that requires dice rolling.

The next two chapters cover pre-generated items and NPC characters, as well as creating new ones. Followed by two chapters that focus on running a game using an effects-based system like the Tri-Stat System that powers BESM.

The book closes out with a decent length chapter on the “official BESM setting” known as The Anime Multiverse. If you’ve ever played the game Eclipse, the multiverse is structured a little bit like the map for it. An expanding web of connected worlds, with Earth at the centre. The chapter provides a 2-3 page overview of each world, enough to give everyone a good idea of the overall setting. But for those who want more, there will be a detailed look with the upcoming BESM Multiverse sourcebook.

There’s so much to love in this game, even if you aren’t an anime fan. I remember coming home from a tour with a stage show, and meeting up with a castmate that went to Japan instead of Europe, and he brought back these weirdly adorable “Pocket Monsters” before they commercially arrived in North America. That’s how long I spent avoiding Pokémon, but damn skippy I want to play as a “Pet Monster Trainer” with a cute Neomorph Companion. At the other end of the spectrum, you can supersize the game with rules for destroying buildings and even blowing up planets. Of course, blowing up the main worlds of the Cosmic Web that make up the Anime Multiverse proper a challenge. Such a game would inevitably land in the less connected Outer Worlds or and Beyond giving it a very different sort of vibe.

Not everything in this book is perfect; and not everything in this game is perfect. There are a lot of things that aren’t very intuitive, a fact they openly admit with the quote “hit modifiers might not be intuitive, but they work.” The rules for Companions are equally difficult, with different verbiage used to refer to companion power levels in different entries throughout the rulebook. Also, the Companion rules are separated oddly in a few places. I’m honestly hoping that the BESM Extras sourcebook (crowdfunding in the fall) will expand on the rules for creating and using Companions. The rules, as written, aren’t terrible or anything. But they could be a bit tighter, that’s all.

On the positive side, the game is surprisingly and pleasantly self-aware. One of the early comments I heard when this game was announced, was “do we really need yet another culturally specific game designed by yet another white guy?” While I can’t speak for previous editions, this BESM is very much anime from a North American viewpoint. It’s not trying to be legitimate anime/manga, but rather a respectful homage to it. It admits that there can be elements that don’t appeal to all players and could even be difficult for some of the people. It reinforces multiple times that making sure nobody is made uncomfortable at the game table is important. Communication is always key, and some things simply don’t belong in a game. Period. They have the sorts of reminders that we SHOULDN’T need to be given, but now more than ever we really really do need.