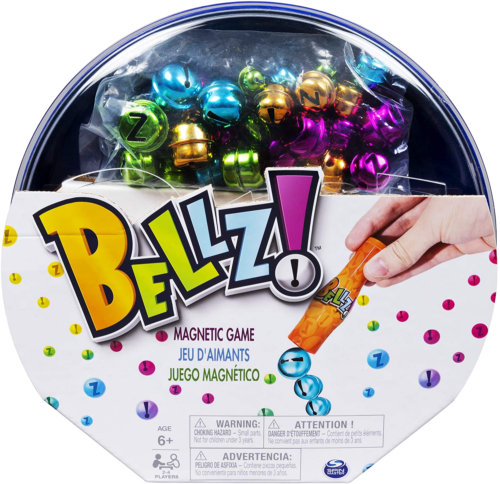 One of the problems with buying your own games is that you tend to get stuck in a rut. So when the former Coles at Southgate finally reopened as “Indigo Spirit”, I decided to try something completely different. Bellz is a magnetism based dexterity game that is reminiscent of Barrel of Monkeys and Pick up Sticks. The entire game consists of a plastic case that doubles as a “player arena”; a magnetic wand with a fat “strong magnet” end and a narrower “weak magnet” end; and a collection of brightly coloured bells, 40 in total in 4 colours and 3 different sizes. Even though the case does have a tight fitting lid*, I would recommend checking to make sure all bells are there at the beginning and end of every game. And of course, this game is not recommended for small children without supervision, due to small game pieces being a choking hazard. [Editors Note: some editions of Bellz! come in a pouch not a case. But still count your bells. -dc]

The goal of the game is to pick up all the bells of your chosen colour, while avoiding the other colours. Scoring is all or none, there is no points system, the first person to collect all 10 of their bells wins, everyone else loses. The game can be played by 2-4 players, although technically I suppose you could play solitaire if you really wanted. The players take turns using the magnet to collect bells of their chosen colour. There are three ways for a turn to end. First, you can choose to stop. That means that whatever bells are currently attached to either or both ends of the wand are yours to keep. The fact that you can decide when your turn ends adds an interesting “press your luck” element to an otherwise physical game. The second way that your turn ends is if you pick up any bell that isn’t your colour. If this happens, you must return all your bells to the arena, and you get nothing. Finally, if one or more bells fall off of your magnet, then again you lose your turn, and don’t get any bells. When your turn ends, you hand over the magnet to the next player, and their attempt begins. Play continues until someone collects all 10 of their bells. That’s it, that’s all the rules.

It was the combination of colour and sound that caught my attention, which made me think that it would be a simple, silly game. When I started playing, I quickly discovered that there was strategy and tactics involved, beyond just steady hands. One of my favourite tactics was to slide the magnet around the outside of the arena wall, to try to move bells away from my target. I also noticed that this game is surprisingly educational. I could definitely see this game as a hands-on demonstration for such things as the difference between strong and weak magnetic fields, the distance that a magnetic field extends beyond the object that produces it, and the fact that an object that touches a magnet can itself become magnetic.

The advertising for Bellz frequently uses the phrase “simple to learn, hard to master”. While I feel that this is true, my only real complaint about this game is that it is too simple, or at least the instructions are. There are a lot of little details that had to be “house-ruled”. For example, is it okay to hold the edge of the arena tray with one hand while using the magnet with the other hand? Is it okay to rotate the arena tray at the start of your turn? In the middle of your turn? The one house rule that we did decide for certain was the idea that, if an off-colour bell gets attached, you have the chance to try to detach it, as long as at least one bell is still touching the playing surface. We just thought it would make things fairer. A friend of mine pointed out that it would be interesting if the small bells were worth more than the large and medium sizes, since that would add another layer of strategy, and avoid the temptation to always go for the easiest target first.

If you are looking for a game that is quick to play, effortless to set up, and surprisingly addictive, I would recommend Bellz. It’s portable, fun to play, and a lot more challenging than you would expect at first glance.