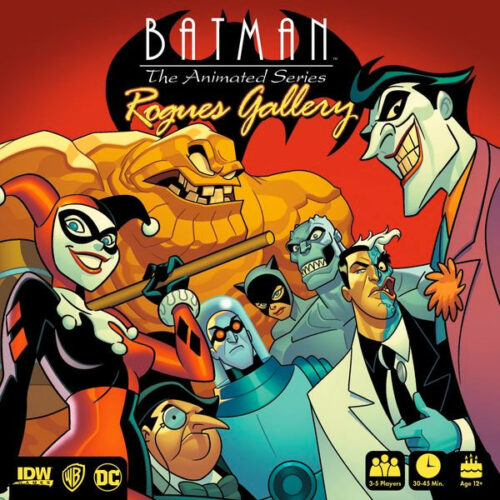 Batman: The Animated Series, is more than “just” a cartoon, and its reach continues to extend much farther than it’s too-short 85 episode run. It was the first show in what would become the 14-year long, shared, DC Animated Universe. It spawned several more shows in this shared continuity, several of which spawned their own spin-offs. There were both theatrical and direct-to-video films, comics, toys, and video games. The show’s influence still continues in DC animation today, and with Kevin Conroy’s first live appearance as Batman in the upcoming Crisis on Infinite Earths “Arrowverse” crossover, and the subsequent fan campaign to likewise cast Mark Hamil as that world’s Joker, it even extends beyond animation. Oh, and do I need to mention that Harley Quinn was created for The Animated Series? I mean, we all know how well that’s gone.

Players start by choosing a character sheet, featuring one of 11 of Batman’s most iconic villains, each with their own unique abilities. The first player Prepares by rolling the seven green Common dice along with any purple Power dice they have and then flipping any Lucky Coins they have. From there, they go on a Crime Spree. The top card of the Hero deck is revealed, and the player can choose to activate any powers, Accomplices, or Upgrades, before assigning as many of their dice as they need/can to defeat that Hero. If the player defeats the Hero, they have the option to continue their Crime Spree or stop. If they continue, they draw a new Hero card, and if they ever can’t defeat a Hero, they get arrested by them.

If the player finishes their Crime Spree without being arrested, they gain the number of Scheme Tokens the defeated Heroes were worth. Scheme Tokens can then be spent to buy Upgrade Cards, Accomplice Cards, or to increase their own power to gain more dice next round. If the Hero arrested them they don’t have the option to purchase upgrades but they do, however, still gain two Scheme Tokens, a Lucky Coin, and the top Accomplice card from that deck.

Accomplice cards have a few interesting purposes in the game. Each of the cards represents one of the (how do I put this nicely) “less iconic” villains of Batman: The Animated Series. Each Accomplice has a unique ability when activated, and there are alway three Accomplices face up to be hired during the Upgrade Phase. If you activate an Accomplice by handing the card to the player to your right, to do the action on that Accomplice. The second thing you can do with them is to discard them to activate Upgrade cards. When you do this, you can use the ability on the Upgrade card, and next turn the discarded Accomplices return to your hand. Upgrade cards are those “wonderful toys” that villains buy, build, or steal, that like Accomplices, can be purchased from the face-up row of them during the Upgrade Phase.

Seems pretty easy, right? Some dice chucking with some card drafting and light engine building mechanics. It’s not as easy as it sounds. Simple, yes, but not easy. What’s missing from all of this talk of Batman? Oh, I don’t know, maybe Batman? Let’s jump back to the Crime Spree for a moment. Each time a player defeats a hero, the marker moves up a track on Bat-Signal board, and when it reaches the top, Batman shows up. There are three versions of the Bat, and the player draws the top one to face. If they can beat him, they win. If not, Batman arrests them.

The pacing of the game is a bit unusual. Because there is an engine-building aspect, it feels like you should be taking your time to actually build up your forces before taking on Batman. But because this game only runs around 30 minutes, it moves much faster than you expect. The other impact that the pacing has is that abilities that seem overpowered at first, are significantly less usable than you might think. Once you understand the speed of the game, it somehow works. Although we did stumble on a potential first turn win scenario for the second player, it required an unlikely string of good luck.

This game isn’t for everyone. One of the groups I played with fell into a major case of “analysis paralysis”, they all over thought their choices and created a huge amount of downtime for the non-active players. Unfortunately, that downtime is a distinct downside to the game at any speed. Beyond the passing of cards and setting up the next player for an encounter with Batman, there isn’t much inter-player interaction. But when everyone keeps the game moving, it’s a ton of fun.

Keeping the pace up also helps with the replayability. There are already 11 different Villains you can play as, meaning you can play at least two games with entirely unique characters if you are playing a full group of five. If you reset any used Upgrades and Accomplices at the bottom of their decks, you can probably go even longer without repeats for them. That doesn’t hold true on the Hero side, however. The low-level Heroes have a lot of generic Beat Cops and SWAT members. The higher-level Heroes, the actual superheroes, are individual but there’s not altogether there aren’t many, and that’s ok and it fits the theme. The bigger issue every one of my players had was with Batman. There are three versions of the Caped Crusader, so you never know exactly how the battle will go. But there are ONLY three versions and that’s not enough to properly accomplish what was intended.

The only other big issue we found was that some of the ability rules were hard to be sure how they were meant to work. For example, “When [Hero] tries to stop you, re-roll all dice showing [#] that are in your dice pool.” Does that mean re-roll once, or keep re-rolling until no dice show that number?

Overall, this is a fun, fast, casual game. Don’t try to overthink things and just play. I think you’ll have a good time. We certainly did.