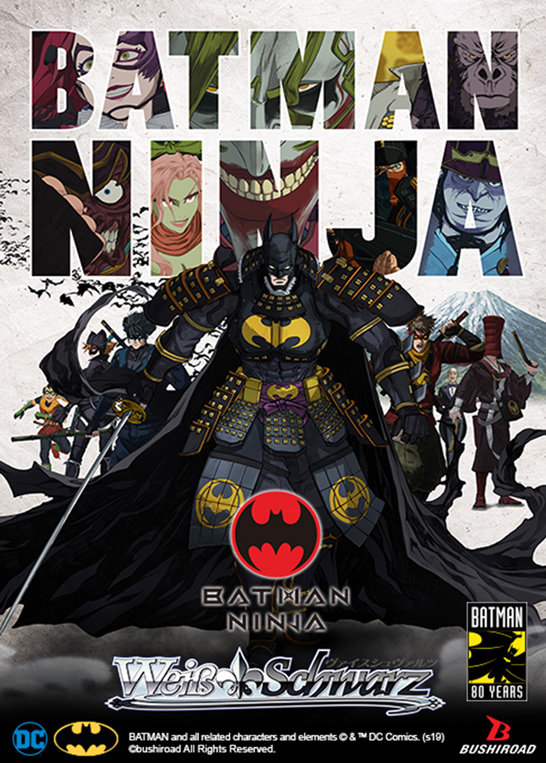 T’was the night before GenCon,
And all through the halls,
Many people were stirring, because the setup was still happening and 70,000 people would be descending on the Indianapolis Convention Center in the morning and stuff wasn’t done yet.

(Hey, when I started writing this I’d just gotten back from a 3-day drive and was back on the road a day later. If you want poetry you’re in the wrong place.)

Anywhoo, there I was chatting with people and the setup crew was working away, coordinating 2 lifts to put up this giant 20′ x 30′ banner. They were having some technical difficulties, so we had sort of stopped to watch. What was on this giant banner, you may wonder? Well my rambling usually brings us to a point, so the banner was for Batman Ninja.

Eventually, I made it around to Bushiroad booth, publishers of Batman Ninja. It was at this point that I realized that Batman Ninja is not a standalone game, but rather an English language exclusive set within the larger Weiß Schwarz Collectable Card Game (or CCG). I was a bit annoyed that is wasn’t made clearer on the advertising, since I don’t really do CCGs, but hey why not. So I picked up their demo version of the trial deck, and here we are.

I guess the best place to start is the term “trial deck”. Whether it’s intentional or a weird translation thing, I don’t know. But a Weiß Schwarz “trail deck” is just their 50 card, prebuilt/semi-random, starter. It seems like an odd term, but whatever.

Besides the Trail Decks, you can also get booster packs. These are 8-card packs that are often sold in a display box of 20 packs. The boosters have random cards from the 100 card set, which also includes 26 Parallels (Rarer, alternate, versions of a card. Often with embossing and/or different art, but that are functionally the same as the basic version.) On top of the cards, you can also purchase a “Supply Set” which contains a themed deck case, a pack of 60 card sleeves, along with 5 Booster Packs. Because Batman Ninja, and almost every set, is based around an anime, every trail deck and booster pack has a chance to contain a signed card by the voice cast of that particular show.

I was going to say that that if you’re familiar with other CCGs, the rules are easy to pick up. In some ways, that’s true. In other ways, I’m actually starting to think that may not be true.

You start your turn by Standing Up any characters you used in you last turn, resetting them for use in the current turn, and then drawing a card. Pretty standard, so far.

Next is the Clock Phase, where you can discard a card, to draw two more cards. The card you discard doesn’t go into your Waiting Room (discard pile) but rather your “Clock Area”. This area is one of the most interesting aspects of the Weiß Schwarz game. It acts as both a mechanism to get stronger but also how you take damage. Whenever you get seven cards in your Clock Area you go up a level, which lets you play stronger cards. However, if you get to Level 4 you lose. It’s a very anime way of handling damage. I like it.

Your main phase is your main phase, not dissimilar to the main phase of every game in existence. This is when you get to play most of your cards. There are some single-use event cards, but most of the cards you’ll play are character cards. As long as you are the appropriate level and can pay any listed costs, you can play as many cards in your turn as you like. The only real restriction is that you can only have up to three characters in your Center Stage area (your front line that will do battle) and two characters in you Backstage Area (often characters that give bonuses to the characters in the Center Stage area). During this phase, you can also move characters between and of the five stage positions. You can simply replace a character in play (sending the replaced card to your waiting area) or move them to another position (like Backstage) to create an open spot.

After the Main Phase, there is the Climax Phase. Climax cards have a couple of uses, but in this case, you can play one prior to the attack phase, usually to give your side an advantage.

Attacking in Weiß Schwarz is a bit more complex than many CCGs. A player chooses one character in their Center Stage area, and rests them (turns them 90º) to indicate they are being used. If there is no character in the Center Stage spot directly opposite, that character makes a Direct Attack, dealing damage (with a +1 bonus) to the other player without interacting with another card. If there IS another character card directly across for them the play can choose either a Frontal Attack or a Side Attack. A Side Attack bypasses the character across from them, but the damage dealt to the opponent is reduced by the level of the character avoided. A Frontal Attack takes the attacking character, and the character directly across from them, in their opponent’s Center Stage area, and they will compare power to see who gets the glory and who gets to go to the Waiting Room. There is only one power stat, add any bonuses, the highest number wins, everyone loses on a tie. Here’s another neat part of this. Win or Lose on a Frontal Attack, the attack still deals damage, just as they would on a Direct or Side attack. But I’ve gotten ahead of myself a bit.

Backing up a bit, this is how a Frontal Attack unfolds. Declare the attack. Next, the attacking player flips over the top card of their deck. This is called the Trigger Step. If the card flipped has an icon in the top right corner, you trigger that effect and place the card facedown in your Stock (which is used as a resource to pay for certain cards). In most cases, the Trigger card will have either nothing or a Soul icon, but the occasional card will have something different. In the case of Soul icons, these represent the damage you will do when attacking your opponent. One soul = one damage. But before any damage gets applied, your opponent has the opportunity to play a “backup” card to help their own character. Assuming their character (or backup) doesn’t somehow negate the incoming damage, the player being attacked takes damage equal to the Soul points of the attacker.

Yes, you read that right. Even if there is a defending character, the player takes the damage, and no I didn’t skip the battle between characters.

No matter what type of attack is made, the player takes damage. How they do that is the damaged player flips over cards from their deck, one at a time, until they have flipped over the amount of the damage. Those cards then go into their clock area. If that pushed their clock past seven cards then the player levels up, the seven clock cards go to the Waiting Room, any cards above seven remain in the clock area. HOWEVER, if a player reveals a Climax card while taking damage, they stop flipping, and the revealed cards are instead placed in their Waiting Room, negating the damage. (Remember when I said Climax Cards have several uses?)

Once the player damage is dealt and dealt with, the Characters do battle. This is a very simple process. Take each Character’s power, add in any bonuses or penalties from other cards, and compare the totals. Highest total wins and the weaker character is Reversed (turned 180º vertically) to indicate they lost. If there is a tie, both characters are reversed.

The active player may repeat the Attack Phase process, separately, for each of their Center Stage characters. Once all attacks are complete, all Climax cards and Reversed Characters are sent to the waiting room. If the active player has more than seven cards in their hand they discard down to seven, and the next player starts their turn.

If at any point in all this your deck runs out, you don’t lose like in many games. You simply shuffle up your waiting room and put the top card into your Clock Area as a penalty.

When a player levels up to Level 4, they immediately lose. This is one of the most fascinating mechanics in the game. As you damage your opponent, pushing them closer to losing, you are also making them more powerful and inherently harder to defeat.

As far as CCGs go, Weiß Schwarz is both interesting and unique. Players need to focus on efficient use of attacks, rather than big attacks, because of the likelihood of a Climax Card negating their damage. You aren’t just managing your hand, and the cards in play, but multiple areas. With the Clock Area, and Stock (which I didn’t talk about much), making card counting harder, and putting an extra level of uncertainty into play.

Outside of just the unusual game mechanics, the community (at least here in Alberta) is surprisingly accepting. I was lucky enough to sit down with members of both the Edmonton and Calgary Weiß Schwarz groups and everyone was happy to talk and help me learn. This becomes extra important when you factor in that Japanese language cards are both play-legal and common. You need a community that you can trust not to screw you in translation.

The last thing I like about Weiß Schwarz as a whole is that it almost pushes heavily into a Living Card Game model. Even though the boosters are randomized, the trial decks are largely prebuilt. Even with the random boosters, the Batman Ninja set is only 100 cards and is an entirely self-contained set. Next month you’re not going to have to reinvest in more Batman Ninja cards. You may want to buy the upcoming Gobinslayer set, or some of the dozens of other sets based on your favourite anime, but you don’t have to.

Most of my complaints, and it’s hard to even call them that, are things like not understanding the rationale behind how powerful various cards are in comparison to each other. It’s also not an inexpensive buy-in compared to other CCGs, but it could also be worse.

If you want to know why I don’t review many CCGs, just look at the length of this review. Even at this length, I left a TON of information out. While I was at Animethon in Edmonton, Alberta, I filmed a short video on Batman Ninja for The Watch. I had to gut that video to stay under time. That being said, I’ve enjoyed playing this and may even stop in at the odd event when I have time.

If you like, you can check out my Batman Ninja video HERE.

Special thanks, again, to the Edmonton Weiss Schwarz group and the Weiss Schwarz Calgary group for helping me out with this review.

Everything else Bushiroad can be found at en.bushiroad.com or facebook.com/bushiroad.