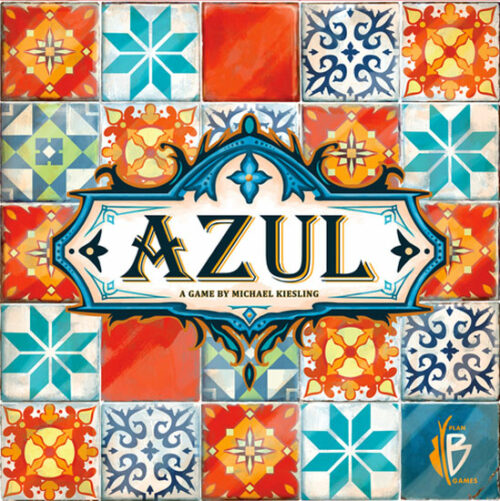 This year was the first time in at least 5 years that I wasn’t either a staff member or a volunteer at Animethon. My budget was tight, so I limited myself to just a gaming pass. The Tabletop Cafe once again sponsored the board game tables, and on Friday I got the opportunity to try another game from my board game bucket list: Azul, by Next Move Games/Plan B. The game, designed by Michael Kiesling with art by Chris Quilliams, is a very beautiful game, based on a simple, but intriguing concept. There is also a second version of the game Azul: The Stained Glass of Sintra, but this review will concentrate on the first, tile themed game.

The name, Azul, comes from the Portuguese word azulejos, which describes painted tiles used to decorate walls. The story behind the game is that, after a voyage to Spain, the King of Portugal fell in love with the idea of decorative tiles and decided to have his entire palace redone in azulejos. In the basic version, the player’s job, as a royal tile-layer, is to procure tiles from the factory and create a wall with a specific pattern. In the advanced rules version, players can choose their own pattern.

As I said before, Azul is a physically beautiful game, with 100 plastic tiles in 5 different types that suggest the art of ceramic tile while still being durable. There are also 4 playing boards, one for each player, 9 small boards used as “factory displays”, and 4 small wooden cubes used to mark your place on the scoring track. Rounding out the content of the box is a cloth bag to hold the tiles and detailed instruction manuals in both English and French. (At least in the Canadian version there are French rules.)

The instructions are clearly written, but they contain a lot of detail. I would recommend reading thoroughly before jumping in, because there were a few rules that I missed right away, noticing them later when I was consulting the manual for something else. Luckily none of my errors were serious enough to restart the game. We just adjusted as we went along.

The game consists of multiple rounds, each divided into two stages. In the first stage, your goal is to acquire tiles, either from the “factory displays” or from “general sales”. This is done by a drafting method. Before the game, you set up the tiles, putting four random tiles on each factory display board. The number of factory displays depends on the number of players. The “player who most recently traveled to Portugal” goes first (in our case it went to someone who had been to France). They choose a factory display, but not all the tiles, only the ones that are one colour. The rest of the tiles go to the center of the table as “general sales”. After the first turn, players can pick from the factory displays or the general sales pile. But the first person who takes from the general sales pile has to take the “first player” tile and place it on the “floor” row at the bottom of the playing board. The tiles in this row will score negative points later.

There are specific rules about how you place the tiles you have acquired. On the left side of the board are 5 pattern lines. The first line only holds one tile, the next two, etc until the last row holds 5 tiles. Once you place a tile in a certain row, you can only use the same colour in that row. The goal is to complete as many rows as possible, because only complete rows can be used to tile your “wall” in the second phase of play. After the first round, there is an additional rule that you cannot place a tile in a row if a tile of that colour is on the wall row beside that pattern row. That means the longer you play, the more limits there are on tile placement. Players take turns choosing tiles until every tile has been taken, even if that means “dropping” tiles on the floor that don’t work with your pattern rows.

The second phase of each round involves using your pattern rows to tile your wall. Your wall is on the right side of the playing board, with 5 rows across from the pattern rows. Again, there are very specific rules as to how the tiles are moved. Starting with the first complete pattern row, take the tile on the far right of the row and transfer it to the same row on the wall, marching the printed pattern on the wall. Tiles are scored as soon as you place them, based on whether there are other tiles around it. If a tile is alone, it scores only one point. If the newly placed tile has other tiles above, below or beside it, you count the number of tiles in a row (in both directions) as your score. Diagonal doesn’t count. You continue, row by row, skipping any pattern row that isn’t full.

When you have placed every tile you can you clean up your pattern rows. For every row that you have taken tiles from, you remove any remaining tiles and store them in the game lid (not the tile bag). The tiles in the incomplete rows stay were they are. Next, you score the tiles on the floor. These are “dropped tiles” and score negative points. For each tile on the floor row, you lose the point value of that space. Tiles on the floor also go back in the box, except the first player tile, which goes in front of you (meaning you are the first player of the next round). After all tiles are scored, the factory displays are refilled, and the next round begins. If the tile bag is empty, refill it from the used tiles in the box.

This is a fun game, not too easy nor too complex. It would be a good way to spend an evening with friends. And, based on my own experiences, it’s also a good game to take with you to a con (or discover at a con) to meet new friends.

You can find Next Move Games online at www.nextmovegames.com/en or on Facebook at facebook.com/NextMoveGames.