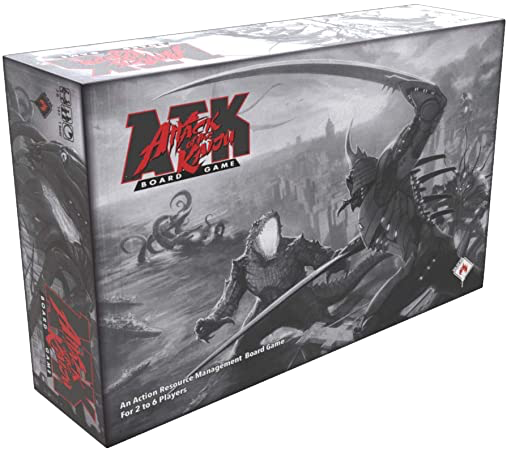 This week is a big disappointment. BIG, like, kaiju big. Tomorrow is the American release of Godzilla vs Kong. I’m one of those people that has been waiting for this film since it came out that Legendary had acquired the rights to both characters. I say AMERICAN release because in much of Canada theatres are still closed and there is no streaming release north of the HBO Max geo-lock.

That’s ok. I’ve been trying to get Attack of the Kaiju on the table again for an embarrassingly long time, and the person I left it with pre-lockdown is finally able to safely meet to play it. I say “on the table again” but that’s me trying to put a positive spin on how the first attempt went. I figured I could still get my fix of monstrous fisticuffs from that instead.

There are a lot of positives to this game. First and foremost is the Kaiju art. The game was intended to feel like the old black-and-white classic giant monster movies of days gone by. While I think they could have leaned a bit more heavily into the tokusatu rubber suit style, they did a great job invoking that feeling. The cheeky names they gave to their Kaiju are equally amazing.

From a gameplay standpoint, the resource management mechanics aren’t perfect, but I do like the general concept. Actions cost energy, successful actions are rewarded with additional energy to spend in future turns. Unfortunately, that’s also where the game starts to fall apart, as the game quickly becomes more about accounting than gameplay.

There are eight general Actions that cost 1-3 Power, another nine Special Attacks that cost 3-8 Power, plus each Kaiju has another two Special Abilities that are unique to them alone. Sometimes these abilities monkey with the Power costs of other actions. For example Jojozirra’s Tail Lash makes destroying structures cost one less Power and Slathuhloo gets a free attack or a free 3 Power Special Attack against an enemy if they roll doubles (some restrictions apply).

Jojozirra is a pretty straightforward thing. But Slathuhloo has 14 options to choose from, except some of those options don’t apply when the ability is triggered, and the ability isn’t triggered in a bunch of situations.

If a group took the time to really get to know what everything does, this could be a great game. But the game gets bogged down in itself, leading to excessive player downtime for what should be a ridiculously simple and streamlined game.

Wildthing no longer actively offers the game, which is good, but I hope that someday they release a second edition with just as much style and a bit better substance because there is a lot of wasted potential in Attack of the Kaiju.