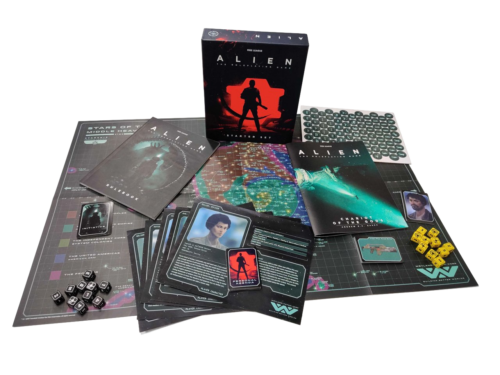 One of the appealing things about pen and paper roleplaying games is that all you need are a handful of dice, a pen, and paper. Sometimes you don’t even need that much. But if you’ve played any decent amount of RPGs, you’ve probably noticed that often not what hits the table. Having extra stuff almost always adds to the game. Some games are fairly interchangeable in their bits. A dragon in one game is visually comparable to a dragon in another game. A set of custom dice is comparable to any set of similar dice.

But when a new game comes out, it inevitably brings with it new players who may not have stuff. Even when they do have workable things, game-specific stuff is still nice. Enter the Starter Box. The Starter Box for ALIEN The Roleplaying Game combines a bunch of previously-individual products with a brand new, 104-page abbreviated rulebook instead of the full Core Rulebook. For this Accessories and… review I’m going to be looking at the accessories as they were individually released (because that’s what I have) but aside from the packaging, I’m not aware of any differences.

The box comes with full-length Cinematic scenario Chariot of the Gods (that I looked at previously) and the shorter Hope’s Last Day scenario that is included in the Core Rulebook. Hope’s Last Day is designed, in essence, to serve as the third segment of a regular 3-Act Cinematic Scenario which focuses more heavily on the action.

Hope’s Last Day also is the basis of what was released as the “Maps & Markers Pack” this includes a 22″x34″ foldable map with a map of the “Stars of the Middle Heavens” on one side and both an overview and detailed maps of Hadley’s Hope colony. If nothing else, the starmap is a great way to set the mood before and during your game. The Hadley’s Hope maps aren’t big enough for miniatures, nor are they intended to be, but they are the right size to track where your crew are on the map and labelling pings from devices like Motion Trackers. The sheet of punchboard markers are well thought out for this. They have a generic “ping” graphic on one side, and the silhouette of a variety of humans and non-humans on the reverse side. Each token is labelled with a letter, making it easy to tell which of the otherwise identical pings or opponents each token represents. Conspicuous by their absence is a marker for an egg or a clutch of eggs, hatched or not. Interestingly it does include a pair of tokens that appear to be [no spoilers] from Chariot of the Gods.

The other half of the tokens are intended for space battles. There are two sets of tokens (one for each side) for selecting orders in secret as well as 8 markers with a different ping graphic on one side and a ship silhouette on the other. The one disappointing thing with these is that the silhouettes all face the same direction, but space battles happen on a head-to-head linear map. I recognize that this makes the tokens easier to deal with, but it means that one side will always be shown as travelling backwards. The other surprising omission for space battles is a nicely printed Space Battle Map. It’s easily printable from the Free League website, but still weird not to include.

With the exception of the cards for selecting initiative order in combat, the Custom Card Deck is the least useful part of all this in my opinion. There are cards for each vehicle and ranged weapon listed in the Core Rulebook, which I suppose can speed things up when picking up a new vehicle or weapon. There are also character cards for each pre-generated character and NPC from both Hope’s Last Day and Chariot of the Gods. These cards have the portrait and name of the character on the front and their basic stats on the back. These can be useful for setting up scenes without showing the character’s stats, and also as a quick way for the Game Mother to come up with an appropriate NPC on the fly in a Campaign game. The upcoming Destroyer of Worlds Cinematic scenario will apparently have similar cards, so it will be interesting to see how this format will grow. (Perhaps there will be a separate storage box in the future?)

The GM screen is pretty standard, with game art of the outside and a selection of important tables on the inside; laid out in three landscape-oriented panels.

The last, and easily most useful, accessories are the dice. There are ten black dice with the success icon on the sixth face. There are also ten yellow Stress Dice with the success icon as well as the face-hugger (stress) icon in the first face. Something that I find important with these dice is that the faces with an icon also show the number on it, making it easy to integrate these dice into other games without the need to explain the icons.

As I mentioned, most of these things can be found separately, but if you don’t have them, this Starter Box is a great way to expand what you have and of course a great way to start playing if you haven’t tried yet. Best of all it comes at a great price point.