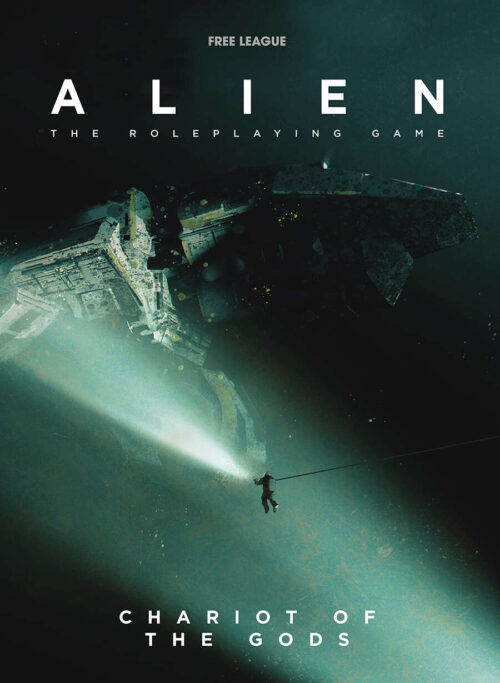 This is a Spoiler Free review of Chariot of the Gods, a Cinematic Scenario for ALIEN: The Roleplaying Game. If you haven’t already read our review of the Core Rulebook, you should consider doing so now.

When I looked at the Core Rulebook I only briefly touched on the difference between Cinematic play and Campaign play. Campaign play is intended to be longer, or potentially even running indefinitely. Cinematic play is close-ended. It may be played in a single session, or over a few sessions, but the structure is the same. Three Acts: beginning, middle, end. Also called the Setup, the Tilt, and the Showdown; a variation of the three-act narrative structure used in most films.

Mechanically there are some differences as well, Cinematic play is written to have specific, pre-generated, characters. Part of what that means is the players won’t need experience points (XP) to further develop the characters they play. One of the ways that XP was earned was by fulfilling Personal Agendas. Rather than removing these objectives in Cinematic play, they become even more important and can change between acts. Personal Agendas are kept secret in Cinematic Play, which can create interesting situations such as a character eventually turning on the rest of the crew and becoming a traitor. For example, a player could be secretly working for a rival corporation that wants the game objective for their own benefit. When players do well at advancing their agenda they are given a Story Point that can be spent at any time to gain one automatic success when rolling the dice.

Chariot of the Gods is intended as an introduction to this format and the game in general. The description on the back cover says the following:

The job was routine, the money fair. Then the damn company diverted you to answer a distress call from a ship that disappeared almost 80 years ago—a derelict carrying something bizarre, twisted, and alien. What the ship’s frozen crew brought back with them was bad enough—what they themselves were turning into was a bloody nightmare. Add to that an annoying sensor ghost shadowing you in the void, and your stress level is shot.

Players each take on part of the crew of the USCSS Montero as they board and search an abandoned and adrift ship. Each character is given a secret Personal Agenda at the start of each act, although it is extremely likely that several of the characters won’t survive long enough to properly advance them.

The centre four pages of the book are maps of the different ship decks and are intended to be removed from the book for the players to use. Although printer-friendly versions of those maps, along with all of the characters, their agendas, and much more are available as free downloads on Free League’s website.

The overall narrative structure of the adventure is obvious linear, but the encounters that will or may happen within each act are very fluid. Some of the scenes are labelled as mandatory but many of them are not. These range from insignificant to scenes that lead into entire sub-plots within the main structure. If the characters don’t trigger the events in those sub-plots they could even be moved into a custom Campaign game later on. There several projected outcomes to the scenario, some endings could be used to lead into future games, some endings are more concrete, some endings are happy, and other endings are… who am I kidding? There are no truly happy endings in ALIEN.

Chariot of the Gods can be found as a standalone product and is also included in the upcoming ALIEN RPG Starter Box. Whichever way you choose to pick this up, it serves as a great way to start playing ALIEN The Roleplaying Game.