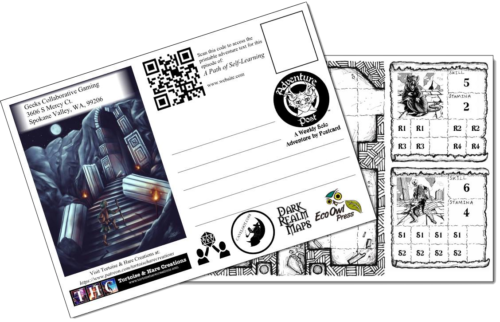 Well well well, here we are again. This random Postcard appeared in Taco’s mailbox. Here he thought the weirdness from the Christmas Adventure he was on was over, he was wrong!

Picking up the card and the reading it, all he saw was “Adventure Post” And suddenly he was outside some weird cavern system. Here we go again! It’s an adventure post time!

Hello again everyone, I had so much fun doing the teaser scenario that the folks putting together put together, as soon as I saw Episode 1 dropped I knew it was time to pick up the dice and jump back in. There will be a few things I skip over in this review as it is a follow-up review, please see my previous review.

A Path of Self Learning is again following the same pattern as the teaser in that it is a quick single player D6 adventure, So I read the rules again, threw down my sheet, reached for my pencil…Which wasn’t there. So I did this adventure with a Pen, Karen must have run off with my pencil, the rules did warn me about Karen, I better be more honest. A few dice rolls and Taco Man has been recreated. I placed my Gandal– Sorry, Taco-man model on the map and started the adventure.

There we some rough battles with a few rats, but Taco-Man was just too much for them. Going into the next room freaking Skeleton was Skeletor or something poor Taco-man barely made it through, but handled it and took care of the next one with ease, must have new the weak points now. Oh was Taco-Man happy he made it a chest, maybe something rewarding will happen in this new world! He opens the chest, and it was glorious for what he saw inside was…nothing. Taco-man has never Yeeted a chest so hard in his life, or ever even threw a chest before. He could have sworn he heard some rats get crushed in the next room, he wasn’t sure. He approached the end, and some weird being appeared, The hell is this place even he thought. After a brief one-sided conversation the being disappeared, Taco-man was going to offer a taco but oh well more for him. Ready to take another step, the whole world paused.

That is it, wait that was it!? It ended so fast, I wanted to keep going. That means I will be waiting with eager hands for the next episode to come out. This adventure was really good, the story writing was perfect, enough to draw you in but vague enough for you to wonder what will happen next. The way that the map information was laid out, I was able to move without reallying knowing what would happen next by accidently reading something I shouldn’t have. Caitlin Hescock is an amazing story writer in how this is all laid out, as I play it I could picture it as a full D&D campaign.

Let’s discuss the art for a moment now. The cover art for this episode is jaw-dropping, when I saw it I thought I just picked up a D&D book from the shelves of a local game store. Indi Martin from Tortoise & Hare Creations is to thank for that, and she should be thanked many times. The map was really good, I loved the little art on it. Small details go a long way to making a map amazing and Dark Realm Maps knew that and applied that to this map.

I think from here out the reviews may get a little smaller, I can only repeat some information so many times before I become boring. That said the adventures of Taco-Man will continue with each new episode. Also at the end I may put it all together and run through it from start to finish. Hey! That’s a youtube or a stream idea right there!

You can subscribe and join the adventure yourself to actually experience the story at https://www.patreon.com/AdventurePost.

You can find Geeks Collaborative Gaming online at www.geekscollab.com or on Facebook at facebook.com/GeeksCGaming.

Jason Alderman is a geek for life. With a passion for all types of games from board games to video games. An experienced DM with many years of running games under his belt. In his free time he is also a professional photographer. Looking for a good pop culture or gaming chat? Be sure to look him up.