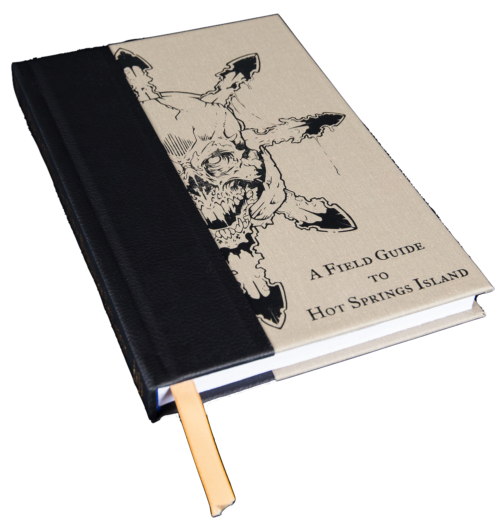 Not long ago I wrote a review on The Dark of Hot Springs Island. The Dark is a ~200 page GM guide to the system neutral setting of Hot Springs Island, one of the largest islands in the chain of Swordfish Islands. Being system neutral, it relies entirely on detailed descriptions rather than stats and numbers. I also mentioned that a GM could run with this setting as an adventure, a whole campaign, or easily pull out various elements out for any other adventure in any system.

A Field Guide to Hot Spring Island is a unique spin on the player’s guide. It is not just a collection of stats, abilities, upgrades, and advancements. It’s written as both an out-of-game resource, but also an in-game artifact. The book in your player’s hand is, page for page, the exact same book that’s in the hands of their character. It presents a unique challenge to a GM, in that it makes it harder to throw certain curveballs at characters. But at the same time, it creates an equally unique opportunity to present a very different sort of exploration. Instead of saying you enter a room full of Steam Imps, which they likely won’t know anyway, the GM can give a description and the players can try to figure out what they are dealing with and how best to handle it. Players can do the same for any major bit of flora or fauna they encounter, assuming said flora or fauna isn’t immediately trying to eat them.

Hot Springs Island is not a newly discovered island. It is known, and it has been explored. However very few of the adventurers who have explored it have returned to tell the tales. The introduction to the book does point out, however, that those who did return did so with “bags of treasure and a whole bard’s worth of stories.” At this point, I would like to suggest that “a bard’s worth” is a unit of measure that needs to be used more often.

The book opens and closes with a number of journal entries, written by Matthias Mayford aboard the ship Sirens Folly, as well as while he traversed the island himself. There are also several letters he received from his acquaintances in academia, which include an Elvish language key, and a similar key to an even more ancient hieroglyphic alphabet. (Thus allowing a GM to include important information written in those languages, that the player may translate if they desire, even in between gaming sessions)

In between these journal entries, are full-page entries on nearly every creature and plant that players are likely to encounter in their adventures on the island. In almost every case, these descriptions a consistent with, but completely different from, than the shorter descriptions for GMs in The Dark book. That point is important to remember if you plan to use this book in-game. Because the information is different, it becomes important for the GM to have a copy as well as the player. Even if the GM is simply running a game in this setting, the information will greatly enhance the story. However, if you are running this setting in a system where you are going to substitute out the creatures, or simply using The Dark to draw inspiration from, this book is less important.

Let’s call this book what it is. Moreso than most player handbooks, this is a marketing gimmick. It’s not “necessary” but is still useful enough, in enough situations, to be extremely beneficial. In fact, if you are a GM looking for inspiration, this is a perfect resource all on its own. A few weeks ago The Renaissance Gamer wrote a column on non-RPG sources of inspiration, and this almost qualifies as that. Obviously, it was written to be included in an RPG game. But at the same time, it could almost stand alone as its own book. I literally own several other fictional “academic” style books that aren’t particularly different than this one, and I think that makes this something very special, indeed.

I truly enjoyed A Field Guide to Hot Springs Island on it’s own merits, but when used in tandem with The Dark of Hot Springs Island is when truly shines. I said this at the end of the previous review, and I’ll say it again now. I can’t wait to see more of the Swordfish Islands down the line. There really is a whole bard’s worth of potential there.