Welcome back to Superfight Saturday. Each month we will look at a different expansion for Skybound Games’ runaway hit party game, Superfight. If you have never played Superfight before, a good place to start would be my review of the Core Game. This month, we will be taking a look at The Con Deck. 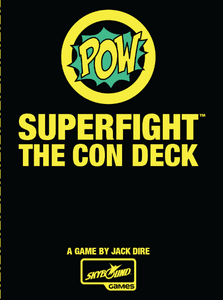 The Con deck is neither about heists nor about politics. It IS, however, about the high holiday of geekdom, the convention. Whether it’s a Comic Con, an Entertainment Expo, or a celebration of all things Anime, most conventions have a ton of similarities. These similarities are what can make Cons amazing and horrific all at once. So come celebrate and denigrate all the things that make Con-life great, in this month’s Superfight Saturday.

While not a hard-and-fast rule, October generally is the end of the convention season for most people. As November rolls in, people start thinking about the upcoming winter season and all that entails. So The Con Deck is a perfect look back at some amazing moments of the past Con season.

As with many of Superfight’s expansion decks, The Con Deck is a semi-standalone deck that could be played on its own, but only for a quick game. There are a handful of Blue Location and Purple Scenario cards, but the bulk of the deck is White Character and Black Attribute cards. While not as “powerful” as the cards in other sets, if you’re a con-goer like me, they may be some of the most enjoyable.

The Blue Location cards are fun with things like The Food Court at 1pm on Saturday (you can imagine that special Hell even if you haven’t experienced it), Inside the Tower of T-Shirts (if you’ve never been to a larger con, this might mean nothing), and At The _________ Cosplay Meetup (which works a bit better when you mix this set with other decks). The Purple Scenario cards are equally cheeky with gems such as All Weapons Have Been Peace Bonded With Zip Ties, All Fighters Are Wearing Child-Sized Costumes, and All Fighters Are Just Cosplay Versions of Themselves.

As always, the real meat of the deck is the White Character Cards. These range from very specific (John Barrowman, who is amazing at Cons), to slightly less specific (A Former Power Ranger), to various archetypes (Booth Babe and A Horde Of Religious Protestors). I think my favourite two are the Super Excited Con Volunteer On Day One and the Day 3 Con Volunteer who Couldn’t Give A Sh*t At This Point.

If the Character cards are the meat, then the Black Attribute Cards are the potatoes. Things get a bit interesting when your fighter is Wearing One Of Those Inflatable T-Rex Suits, is Armed With An Inappropriate Anime Body Pillow, or if their Weapons Were Taken At Weapons Check. Like I said at start, these aren’t super “powerful” but they are wonderfully fun.

If you’re a Con-goer like me, you’ll get a giant kick out of this. If you’re not a Con-goer, it won’t really matter since this is actually a convention exclusive expansion. So next time you’re at a convention with Skybound Games, go say hi and pick up The Con Deck.

In the meantime, you can get more information on Superfight at www.superfightgame.comor on their Facebook page: facebook.com/superfightgame.